New findings from the Herschel space observatory demonstrate how effective the infrared telescope can be at teasing out details of distant planetary systems. At issue is the system around Beta Pictoris, a young star (12 million years old) some 63 light years from the Earth. We’re looking at planetary system formation in progress here, with a single gas giant planet and a dusty debris disk that may be the forerunner of a disk much like our own Edgeworth/Kuiper Belt, the collection of icy bodies that orbits outside the orbit of Neptune.

Ben de Vries (KU Leuven) is lead author of the paper on the new Herschel data, which examines the composition of dust in the outer regions of the Beta Pictoris disk. The study, reported today in Nature, presents a photometric and spectral analysis of dust particles produced when planetesimals in this region collide. The key player here is olivine, a mineral associated with protoplanetary disk material around newborn stars. The olivine found around Beta Pictoris is similar to that found in the dust of primitive Solar System comets.

Herschel has been detecting a magnesium-rich variety of olivine at a distance of 15-45 AU from the star. While olivine can crystallize out of protoplanetary disk material, it eventually becomes part of larger bodies, from comets to asteroids and planets. Usefully, the two states of olivine can be distinguished from each other, as de Vries explains in this ESA news release:

“As far as olivine is concerned, it comes in different flavours. A magnesium-rich variety is found in small and primitive icy bodies like comets, whereas iron-rich olivine is typically found in large asteroids that have undergone more heating, or ‘processing’.”

Moreover, finding olivine in the cold debris disk is itself a marker, for the mineral can only crystallize within about 10 AU of the star. The de Vries team assumes that radial mixing processes are at work, produced not only by stellar winds and heat from the central star but by temperature differences and turbulence in the protoplanetary disk itself. The Herschel data show that olivine crystals make up 3.6 ± 1.0 percent of the total mass of the dust found in this outer region, a figure similar to the Solar System comets 17P/Holmes and 73P/Schwassmann-Wachmann 3, according to de Vries. 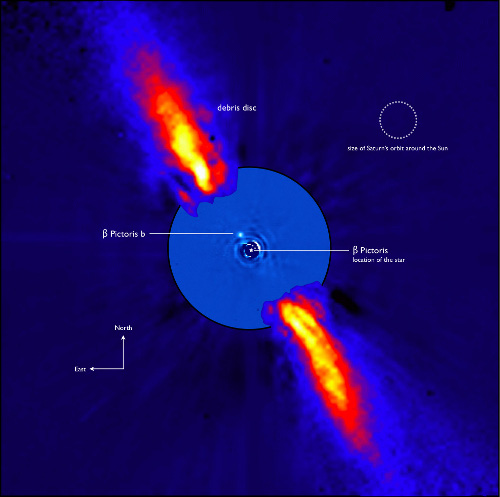 Image: Infrared view of the Beta Pictoris solar system, obtained by combining data from the ADONIS instrument on ESO’s 3.6 m telescope (outer regions) and the NACO instrument on one of the 8.2 m units of ESO’s Very Large Telescope (inner region), and then subtracting the overpowering glare of the central star. The image shows a planet orbiting at roughly the same distance from Beta Pictoris as Saturn is from our own Sun, and a prominent dust disc in the outer reaches of the system. New observations from ESA’s Herschel space telescope have found magnesium-rich olivine crystals in the disc that likely originated from collisions between comets: the dust shares the same compositional characteristics as in several comets in our Solar System. Furthermore, the observation of these olivines in the outer dust disc suggest that they have been transported from their birthplace close to the central star, since they cannot form under the cold conditions found further out. Credits: ESO/A-M. Lagrange et al.

The findings are helpful because they point to basic processes of planetary system growth. Beta Pictoris is one and a half times as massive as the Sun and eight times as bright, but the radial mixing process at work here looks to be roughly the same as that postulated for the early Solar System. Measuring residual materials from an early exoplanetary system is an impressive feat and a reminder of Herschel’s capabilities. Launched in 2009, this is the first observatory to span the entire range from far-infrared to submillimeter wavelengths, pushing deeper into the far infrared than any previous mission. Meanwhile, Beta Pictoris continues to be an ideal ‘laboratory’ for watching a young system grow. It doubtless has much more to teach us.