I hadn’t expected a new paper on KIC 8462852 quite this fast, but hard on the heels of yesterday’s article on the star comes “KIC 8462852 Faded at an Average Rate of 0.165±0.013 Magnitudes Per Century From 1890 To 1989,” from Bradley Schaefer (Louisiana State University). Schaefer takes a hard look at this F3 main sequence star in the original Kepler field not only via the Kepler data but by using a collection of roughly 500,000 sky photographs in the archives of Harvard College Observatory, covering the period from 1890 to 1989.

The Harvard collection is vast, but Schaefer could take advantage of a program called Digital Access to a Sky Century@Harvard (DASCH), which has currently digitized about 15 percent of the archives. Fortunately for us, this 15 percent covers all the plates containing the Cygnus/Lyra starfield, which is what the Kepler instrument focused on. Some 1581 of these plates cover the region of sky where KIC 8462852 is found. What Schaefer discovers is a secular dimming at an average rate of 0.165±0.013 magnitudes per century. For the period in question, ending in the late 1980s, KIC 8462852 has faded by 0.193±0.030 mag. From the paper:

The KIC 8462852 light curve from 1890 to 1989 shows a highly significant secular trend in fading over 100 years, with this being completely unprecedented for any F-type main sequence star. Such stars should be very stable in brightness, with evolution making for changes only on time scales of many millions of years. So the Harvard data alone prove that KIC 8462852 has unique and large-amplitude photometric variations.

That’s useful information, especially given the possible objection to the Kepler findings that they might be traceable to a problem with the Kepler spacecraft itself. Evidently not:

Previously, the only evidence that KIC 8462852 was unusual in any way was a few dips in magnitude as observed by one satellite, so inevitably we have to wonder whether the whole story is just some problem with Kepler. Boyajian et al. (2015) had already made a convincing case that the dips were not caused by any data or analysis artifacts, and their case is strong. Nevertheless, it is comforting to know from two independent sources that KIC 8462852 is displaying unique and inexplicable photometric variations.

As Schaefer notes, KIC 8462852 can now be seen to show two unique episodes involving dimming — the dips described here yesterday for the Kepler spacecraft, and the fading in the Harvard data. The assumption that both come from the same cause is reasonable, as it would be hard to see how the same star could experience two distinct mechanisms that make its starlight dim by amounts like these. The timescales of the dimming obviously vary, and the assumption would be that if the day-long dips are caused by circumstellar dust, then the much longer fading that Schaefer has detected would be caused by the same mechanism. 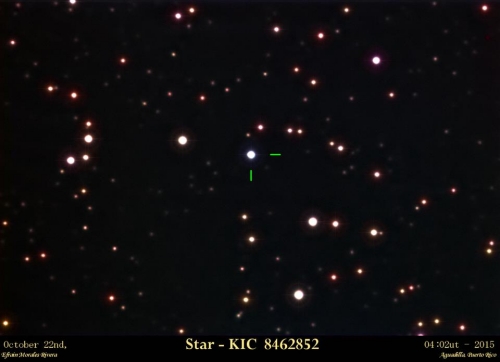 Thus we come to the comet hypothesis as a way of explaining the KIC 8462852 light curves. Incorporating the fading Schaefer has discovered, a cometary solution would require some mind-boggling numbers, as derived in the paper. From the summary:

With 36 giant-comets required to make the one 20% Kepler dip, and all of these along one orbit, we would need 648,000 giant-comets to create the century-long fading. For these 200 km diameter giant-comets having a density of 1 gm cm−3, each will have a mass of 4 × 1021 gm, and the total will have a mass of 0.4 M⊕. This can be compared to the largest known comet in our own Solar System (Comet Hale-Bopp) with a diameter of 60 km. This can also be compared to the entire mass of the Kuiper Belt at around 0.1 M⊕ (Gladman et al. 2001). I do not see how it is possible for something like 648,000 giant-comets to exist around one star, nor to have their orbits orchestrated so as to all pass in front of the star within the last century. So I take this century-long dimming as a strong argument against the comet-family hypothesis to explain the Kepler dips.

If Schaefer’s work holds up, the cometary hypothesis to explain KIC 8462852 is deeply compromised. We seem to be looking at the author calls “an ongoing process with continuous effects” around the star. Moreover, it is a process that requires 104 to 107 times as much dust as would be required for the deepest of the Kepler light dips. And you can see in the quotation above Schaefer’s estimate for the number of giant comets this would require, all of them having to pass in front of the star in the last century.