Given the vast distances of interstellar space, you wouldn’t think there would be much chance of stars colliding. But it’s conceivable that so-called ‘blue straggler’ stars are the remnants of just such an event. A large blue straggler contains far more hydrogen than smaller stars around it, and burns at higher temperatures, with a correspondingly shorter life. When you find a blue straggler inside an ancient globular cluster, it’s natural to ask: How did this star emerge?

Packing stars as tightly as globular clusters must produce the occasional collision, and in fact astrophysicist Michael Shara (then at the American Museum of Natural History) has estimated there may be as many as several hundred collisions per hour somewhere in the universe. We would never be aware of most of these, but we could expect a collision every 10,000 years or so within one of the Milky Way’s globular clusters. In fact, the globular cluster NGC 6397 shows evidence for what may have been a three-star collision, the result of an outside star moving into a binary system and eventually coalescing (see Two Stars Collide: A New Star Is Born).

In any case, we can think of our own Solar System’s history to reflect on relatively close passes between other stars and the Sun. WISE J072003.20−084651.2 is the designation for a star more mercifully known as Scholz’s Star, discovered in 2013 in the southern constellation Monoceros. It took a scant two years for Eric Mamajek and co-researchers to report that Scholz’s Star passed through the Oort Cloud some 70,000 years ago.

It was evident that Scholz’s Star showed little tangential velocity. But which way was it moving? Mamajek discussed the matter in a 2015 news release:

“Most stars this nearby show much larger tangential motion. The small tangential motion and proximity initially indicated that the star was most likely either moving towards a future close encounter with the solar system, or it had ‘recently’ come close to the solar system and was moving away. Sure enough, the radial velocity measurements were consistent with it running away from the Sun’s vicinity – and we realized it must have had a close flyby in the past.”

Now 20 light years away, the star is the subject of new work on Solar System orbits. For a close stellar pass can leave traces that linger. A team led by Carlos and Raúl de la Fuente Marcos (Complutense University of Madrid), working with Sverre J. Aarseth of the University of Cambridge, has created numerical simulations to analyze the positions of some 340 objects on hyperbolic orbits. The idea is to work out the radiants, positions in the sky from which these objects appear to come. You can see why this paper caught my eye given our recent discussion of ‘Oumuamua and how we might calculate future such arrivals.

Assuming the objects on hyperbolic orbits are moving toward us from the Oort Cloud, which seems a reasonable assumption, we would figure that they would be more or less evenly distributed in the sky. Instead, the paper identifies what the authors call “a statistically significant accumulation of radiants,” an over-density that projects in the direction of Gemini. This, in turn, fits with the system’s encounter with Scholz’s Star 70,000 years ago. From the paper:

It is difficult to attribute to mere chance the near coincidence in terms of timing and position in the sky between the most recent known stellar fly-by and the statistically significant overdensity visible in Figs 3 and 4. It is unclear whether other clusterings present may have the same origin or be the result of other, not yet-documented, stellar fly-bys or perhaps interactions with one or more unseen perturbers orbiting the Sun well beyond Neptune…

The overdensity of high-speed radiants appears to be consistent in terms of location and time constraints with the latest known stellar fly-by, that of Scholz’s star.

I’ll send you to the paper for the actual figures — they won’t reproduce well here.

Scholz’s Star is a binary system, a red dwarf orbited by a brown dwarf, and it is likely that there was a time when our ancestors could see it in the sky. But only barely — Eric Mamajek has pointed out that even at its closest approach, the apparent magnitude would have been in the range of 11.4, which is five magnitudes fainter than what the naked eye can see, even in the pristine skies of paleolithic Earth. What might have been visible would have been flares from the M-dwarf, which could have created short-lived transient events, fleeting but noticeable. 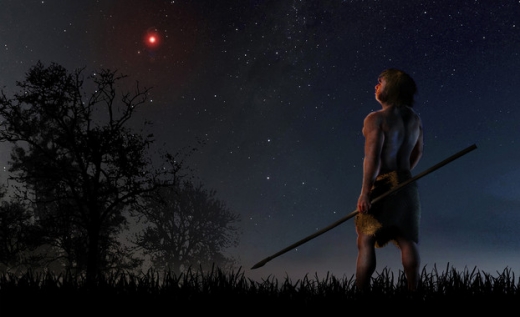 Image: At a time when modern humans were beginning to leave Africa and the Neanderthals were living on our planet, Scholz’s star approached to within less than a light-year. It may have been briefly visible during flare events on the M9.5 primary. Credit: José A. Peñas/SINC

Here’s a graph that Mamajek published on Twitter in 2015. 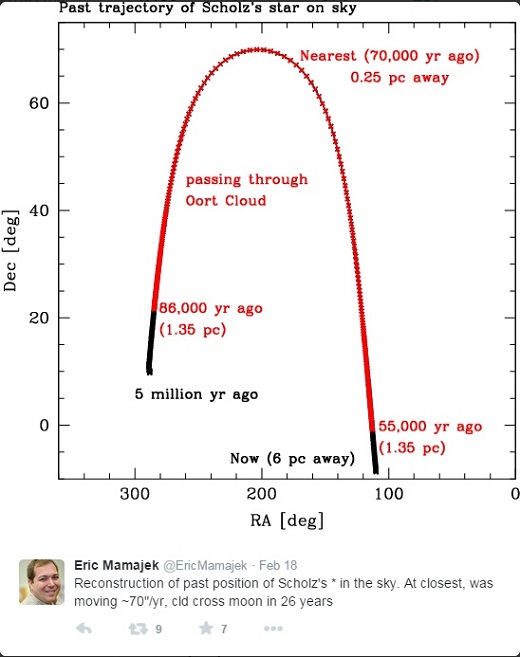 So we have the evidence of disrupted trajectories to back up the finding that Scholz’s Star made a close pass. ‘Oumuamua, incidentally, is not implicated in any of this. Its radiant is in the constellation Lyra, meaning it is not part of the over-density observed by the De la Fuente Marcos team. On the matter of deep space interlopers, though, it’s interesting that the paper names eight hyperbolic comets as being good candidates to have an interstellar origin.

Next post: Interplanetary Exploration: Application of the Solar Sail and Falcon Heavy