Last December I mentioned the ongoing work at the European Southern Observatory’s Very Large Telescope to modify an instrument called VISIR (VLT Imager and Spectrometer for the InfraRed). Breakthrough Initiatives, through its Breakthrough Watch program, is working with the ESO’s NEAR program (New Earths in the Alpha cen Region) to improve the instrument’s contrast and sensitivity, the goal being the detection of a habitable zone planet at Alpha Centauri. Exciting stuff indeed, especially given the magnitude of the challenge.

After all, we are dealing with a tight binary, with the two stars closing to within 11 AU in their 79.9 year orbit about a common center (think of a K-class star at about Saturn’s distance). The binary’s orbital eccentricity can separate the stars by about 35 AU at their most distant. The latest figure I’ve seen for the distance between Centauri A/B and Proxima Centauri is about 13,000 AU.

In an ESO blog post that Centauri Dreams reader Harry Ray passed along, planet hunter Markus Kasper explained that the performance goal for the upgraded VISIR requires one part in a million contrast at less than one arcsecond separation, something that has not yet been demonstrated in the thermal infrared. Alpha Centauri A/B will be a tough nut to crack. Kasper makes a familiar comparison: This is like detecting a firefly sitting on a lighthouse lamp from a few hundred kilometres away. 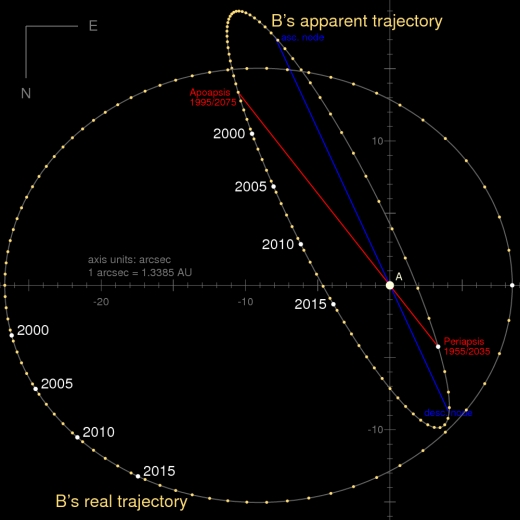 But VISIR may be up to the task. Installed at Paranal, 2635 metres above sea level in Chile’s Atacama Desert in 2004, it has been used to probe dust clouds at infrared wavelengths to study the evolution of stars. The instrument is capable of compiling in a scant 20 minutes as many images or spectra as a 3-4 meter telescope could obtain in an entire night of observations. VISIR has also been used to study Jupiter’s Great Red Spot, Neptune’s poles, and the supermassive black holes that can occur at the centers of galaxies.

Ramping up VISIR’s capabilities for Alpha Centauri is a multi-part effort, as Kasper describes:

Firstly, Adaptive Optics (AO) will be used to improve the point source sensitivity of VISIR. The AO will be implemented by ESO, building on the newly-available deformable secondary mirror at the VLT’s Unit Telescope 4 (UT4).

Secondly, a team led by the University of Liège (Belgium), Uppsala University (Sweden) and Caltech (USA) will develop a novel vortex coronagraph to provide a very high imaging contrast at small angular separations. This is necessary because even when we look at a star system in the mid-infrared, the star itself is still millions of times brighter than the planets we want to detect, so we need a dedicated technique to reduce the star’s light. A coronagraph can achieve this.

Finally, a module containing the wavefront sensor and a new internal chopping device for detector calibration will be built by our contractor Kampf Telescope Optics in Munich. 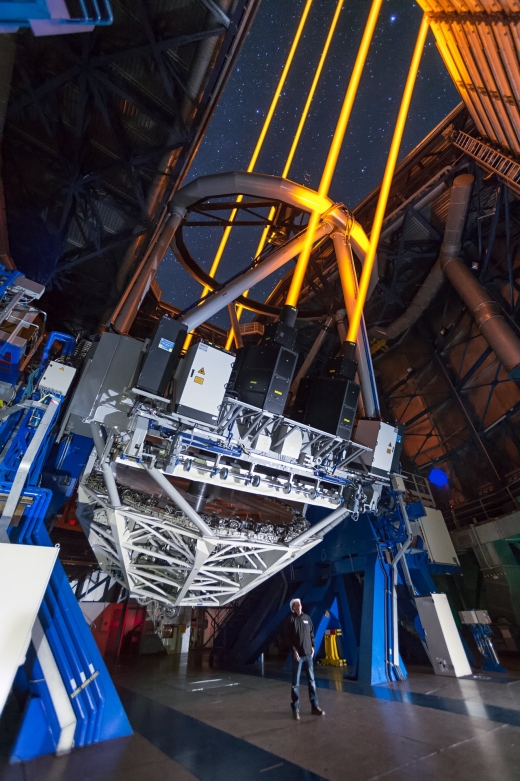 Image: Adaptive optics at work. Glistening against the backdrop of the night sky about ESO’s Paranal Observatory, four laser beams project out into the darkness from Unit Telescope 4 (UT4) of the VLT. Some 90 kilometres up in the atmosphere, the lasers excite atoms of sodium, creating artificial stars for the telescope’s adaptive optics systems. Credit: ESO/F. Kamphues.

The exciting prospect, says Kasper, is that a habitable zone planet could be detected in just 100 hours of observing time on the VLT. To do this will first entail moving VISIR from Unit Telescope 3 to Unit Telescope 4 at Paranal. Hardware testing in Europe continues and the upgrade is expected to be implemented in VISIR by the end of 2018, with the Alpha Centauri observing campaign scheduled for mid-2019, a two-week run that will collect the needed 100 hours of observing time. We may not be far, then, from a planet detection at Centauri A/B.

Kasper points to Breakthrough Initiatives as key players in all this. Let me quote him:

…it is exciting to see how the Breakthrough Initiatives are managing to create momentum in the research field. By backing ideas and projects with a higher risk level than public funding agencies are ready to support, the Initiatives have motivated scientists to push the envelope and leap forward in their research.

Remember that Breakthrough Starshot not only achieved a great deal of media coverage but also caught the eye of a US congressman, with its goal to design and fly tiny probes by beamed sail to the Alpha Centauri system. NASA has begun to look at interstellar concepts again, a small but welcome effort long after the closing of the Breakthrough Propulsion Physics program. Breakthrough Listen is actively conducting SETI at Green Bank and Parkes in Australia. Breakthrough Watch now looks for habitable zone planets within 16 light years of Earth.

Pushing projects with higher risk levels is something that a private initiative can achieve, with repercussions for the broader effort to characterize nearby planetary systems and some day reach them with a probe. We’ll soon have the tools in place to study planetary atmospheres around many of these stars, so the timing of the VISIR effort could not have been better.