How close would a passing star have to come to produce drastic results on the outer Solar System? According to researchers at the Max Planck Institute for Radio Astronomy in Bonn, roughly 3 times Neptune’s distance would be disruptive enough to explain what we see beyond that planet’s orbit today. Led by Susanne Pfalzner, the scientists have been modeling close stellar flybys of other planetary systems for years, but have only recently turned their attention to the eccentricities of our own system, where conditions beyond Neptune pose questions. 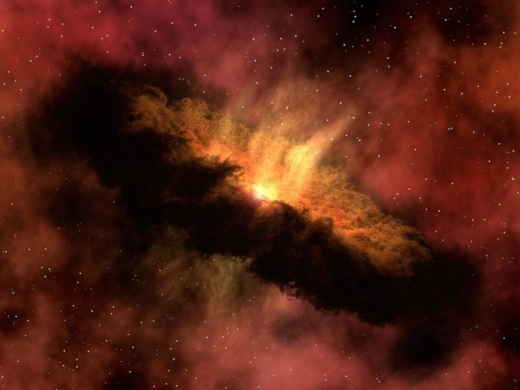 Image: Artist’s concept of a stellar system in the making with a protoplanetary disk surrounding a young star. Credit: NASA JPL-Caltech.

A look at the Solar System’s formation highlights the problematic nature of the process. Out to the orbit of Neptune, planets, dwarf planets and asteroids orbit with only small differences in orbital inclination, indicative of the flatness of the original disk from which all these objects drew their birth materials. But we find that many trans-Neptunian objects move along eccentric, inclined orbits, with objects like Sedna occupying orbits well outside the range of the planets.

What Pfalzner and team added to the mix was another observation: In this distant region, the cumulative mass of the objects we know about drops by almost three orders of magnitude. The assumption is that the outer Solar System must have been modified by processes that took place after its formation. The fact that the drop-off occurs just outside Neptune’s orbit provoked enough interest that the scientists began to perform computer simulations, starting with a young circumstellar disk around the Sun and introducing the close passage of another star.

The result is striking. A star of 0.5 to 1 solar masses moving past our outer system would produce a good fit for the current Solar System, and as we’ll see, in more ways than one:

Starting point of our simulations was the Sun surrounded by a disc, which could either be a protoplanetary or a debris disc, possibly containing already formed planets. We performed an extensive parameter study for the effect of close flybys on discs concentrating on the ones that lead to a steep drop in the mass distribution at 30-35 AU as that observed for the solar system. We found that fly-bys of stars with masses in the range 03.-1.0 M at perihelion distances of between 50 and 150 AU inclined between 50 to 70 degree and at an angle of periastron between 60 to 120 degree are the most promising candidates for a fly-by shaping the outer solar system. Such fly-bys lead to Sednoids, a hot and cold Kuiper belt population and various other properties characteristic for the outer solar system. What distinguishes this model from others, is that only a single event is necessary to create all this features.

Image: Simulation of the stellar intruder scenario for a mass of 0.5 solar masses and a perihelion distance of 100 astronomical units or 15 billion kilometers for the perturbing star (three times the distance between Sun and Neptune). a) average positions of the particles after the fly-by, colors showing eccentricity of their orbits increasing from blue to green. b) particle positions before the fly-by with different eccentricity populations (colors) from the top row Grey regions: particles that became unbound due to the fly-by event. Credit: S. Pfalzner et al.: The Astrophysical Journal (2018).

As the paper notes, a virtue of this model is its simplicity, allowing a single event (the close flyby) to explain a multitude of features about the current system. For there is another puzzle to be explained: The separation between the giant planets around the Sun increases as their mass decreases with distance from the Sun, which is usually considered to reflect conditions in the protoplanetary disk. But Neptune, with a mass of 17.2 Earths, is more massive than Uranus, at 14.6 MEarth.

The Pfalzner paper explains this, for in its flyby simulations, some portion of the matter beyond Neptune moves inward and concentrates between 30 and 35 AU. In fact, the matter involved corresponds to approximately 1-2 Earth masses, pointing to the possibility that Neptune grew from the incoming material to its present disproportionate size. Some other models have suggested that Neptune and Uranus were originally positioned in opposite order than today and moved to their present positions by gravitational instabilities, an idea the flyby model discounts.

A final note is that the so-called ‘cold Kuiper Belt,’ made up of objects that move on fairly circular, low-inclination orbits, does not fit well with any current planet-scattering models, while it does fit within the parameters of the stellar flyby simulations. Moving to the realm of prediction, these simulations make it clear that if the flyby scenario is correct, many additional outer system bodies at high inclinations may yet be found, perhaps including an object of planetary mass.

Recently we looked at Omega Centauri a cluster whose dense composition caused researchers to question habitability given that planetary orbits were so likely to be disrupted by encounters with other stars. It’s worth remembering that stars like the Sun were born in large groups of stars that were originally densely packed, making stellar encounters more likely.

The numbers from subsequent simulations performed by these researchers are interesting, showing that the odds on such an encounter were fairly high:

Performing simulations of the dynamics of star clusters – gas expulsion, expansion and finding a new quasi-equilibrium – we find that such type of fly-bys are probable not only during the early phases but also on Gyr time scales, with a 5-7% chance of all solar-type stars experiencing such a fly-by during the first 10 Myr and a 20-30% chance in the next Gyr. If planet formation is as fast as anticipated from the ring structures in some discs, even a fly-by during the first 10 Myr would be an option. We showed that the probability of such an event even in the consecutive 4.56 Gyr is competitive to that of other models.

Thus we have an alternative to the ‘Nice Model’ and its offshoots for early Solar System formation, one that manages to explain multiple features of the outer system through a single event rather than a series of gravitational encounters. Calling it a ‘realistic alternative’ to present models, Pfalzner points out that it remains a hypothesis, but one intriguing in its simplicity.