Sometimes one mission crowds out another in the news cycle, which is what has happened recently with OSIRIS-REx. The study of asteroid Bennu, significant in so many ways, continues with the welcome news that OSIRIS-REx is now in orbit, making Bennu the smallest object ever to be orbited by a spacecraft. That milestone was achieved at 1943 UTC on December 31, which in addition to the upcoming New Year’s celebration was also deep into the countdown for New Horizons’ epic flyby of MU69, the Kuiper Belt object widely known as Ultima Thule. 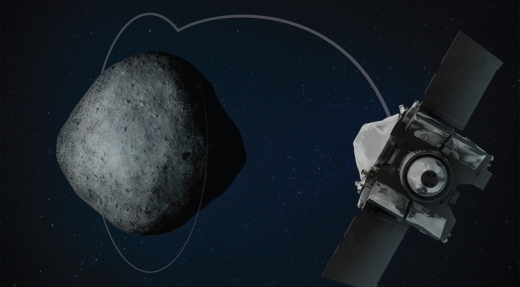 I suppose the classic case of mission eclipse was the Voyager flyby of Uranus, which occurred on January 24, 1986. I was flying commercial students in a weekend course four days later in Frederick, MD and anxious to hear everything I could about the flyby, its images and their analysis, but mid-morning between flights I learned about the Challenger explosion, and the news for days, weeks, was filled with little else. Now, of course, we can study the striking images of Uranus’ rings and the tortured moon Miranda, putting them in the great context of Voyager exploration, but for a time the story was mute.

OSIRIS-REx has a long period of mapping and sampling ahead of it, with the sample site selection gearing up, and we’ll have plenty to say about it in coming weeks. Ponder that the spacecraft orbits Bennu from a distance just 1.75 kilometers from its center, a tighter value even than Rosetta’s, when it orbited 7 kilometers from the center of comet 67P/Churyumov-Gerasimenko.

“Our orbit design is highly dependent on Bennu’s physical properties, such as its mass and gravity field, which we didn’t know before we arrived. Up until now, we had to account for a wide variety of possible scenarios in our computer simulations to make sure we could safely navigate the spacecraft so close to Bennu. As the team learned more about the asteroid, we incorporated new information to hone in on the final orbit design.”

Using 3-D models of Bennu’s terrain created from OSIRIS-REx’s recent global imaging and mapping campaign, the mission team intensifies its navigation survey, and will analyze changes in the spacecraft’s orbit to study the minute gravitational pull of the object, which should tighten up existing models of not just the gravity field, but Bennu’s thermal properties and spin rate. By the summer of 2020, controllers will be ready for the spacecraft to touch the surface for sampling operations, with the sample scheduled for return to earth in September of 2023.