A White Dwarf with Puzzling Rings

Backyard Worlds: Planet 9 is a project worth investigating. Using a database drawn from NASA’s Wide-field Infrared Survey Explorer (WISE), Backyard Worlds: Planet 9 is probing the cosmos at infrared wavelengths. Volunteers search the WISE data in a ‘citizen science’ effort that has already discovered more than 1,000 likely brown dwarfs. Now we have news of an intriguing white dwarf showing apparently multiple rings of gas and dust.

A ringed white dwarf isn’t unique. In fact, dust and rings have been observed around white dwarfs that were considerably younger than the one in question, J0207. As described in a paper in Astrophysical Journal Letters, the object is about 145 light years away in the constellation Triangulum and is thought to be about 3 billion years old. With a temperature of 5,800 degrees Celsius (10,500 degrees Fahrenheit), J0207 produced a strong infrared signal.

Bear in mind that a white dwarf is a remnant, a star left behind when its Sun-like predecessor, running out of nuclear fuel, has gone through red giant phase and ejected half of its mass, leaving the hot dwarf behind. As has been depicted in numerous science fiction tales, a swollen red giant can engulf its inner planets while pushing more distant planets and asteroids outward. Something of the future of our own Solar System is thus suggested.

What made J0207 stand out for discoverer (and paper co-author) Melina Thévenot, a citizen scientist based in Germany, was infrared emission indicating the star was surrounded by a dusty disk. We could be looking at a process of tidal disruption here, in which asteroids and comets in the stellar neighborhood are brought closer to the star by gravitational interactions with surviving planets. In any case, approaching the white dwarf, they would be torn apart by the star’s gravity. The ring that emerges will eventually dissipate, spiralling down onto the surface of the star.

Having discovered something odd about J0207, Thévenot assumed there were problems with the data. Consulting the European Space Agency Gaia archives for brown dwarfs, she identified J0207, and compared it to the source in the WISE data. Its brightness and distance confirmed it was not a brown dwarf, at which point she passed her results on to Backyard Worlds: Planet 9, where Adam Schneider (ASU), John Debes (Space Telescope Science Institute), and Marc Kuchner (NASA GSFC), who leads the Backyard Worlds: Planet 9 project, could examine them.

It would be Debes and Kuchner who, working with UC-San Diego astronomer Adam Burgasser, arranged follow-up observations of J0207 with the Keck II instrument in Hawaii. What makes J0207 stand out in relation to other white dwarfs with dust disks is its age. Given a process in which asteroids are ground apart by gravitational interactions with the star, we should get to the end of the line — with all such materials incorporated into the star — in a fairly short time. This is especially true if the white dwarf is not part of a binary, which J0207 is not.

“This white dwarf is so old that whatever process is feeding material into its rings must operate on billion-year time scales. Most of the models scientists have created to explain rings around white dwarfs only work well up to around 100 million years, so this star is really challenging our assumptions of how planetary systems evolve.” 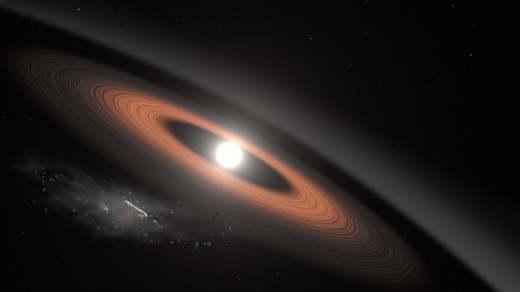 Image: The star, designated LSPM J0207+3331, is the oldest, coolest white dwarf known to be surrounded by a ring of dusty debris. This illustration depicts the ring with two distinct components, which scientists think best explains the system’s infrared signal, and an asteroid broken up by the white dwarf’s gravity. Credit: NASA Goddard Space Flight Center/Scott Wiessinger.

We may also be looking at a second point of interest, for the J0207 disk shows evidence of being composed of more than a single ring-like component. That would be a first in white dwarf observations, and for it I turn to the paper:

…the infrared excess seen for this disk requires a second, colder ring of dusty material that could potentially signal the presence of a gap in the system, or a component of dust that extends beyond the outer edge of the inner disk. If the second ring is confirmed, it would be the first example of a two-component ring system around a dusty white dwarf. If the dust disk has a gap near 0.94 R, this implies the possibility of a body that continuously clears dust from the system, since the PR drag timescale is so short.

So we have what the paper calls “an interesting test of dust disk accretion“ in J0207, given the age of the star. The researchers suggest further investigation in the form of optical spectra of this white dwarf to look for metal lines from accreted dust to examine the actual accretion rate.

I can’t say enough how much I support Backyard Worlds: Planet 9 and other citizen science projects that are not only producing high-quality results but also involving the wider public in our ongoing exploration of the cosmos.