It looks bright enough to be a foreground star, but this supernova, called SN 2004dj, is 11 million light years away in a galaxy known as NGC 2403. Not particularly germane to interstellar propulsion or finding candidates for robotic probes, but simply too remarkable a sight to ignore. You can read more about this Hubble photograph here. 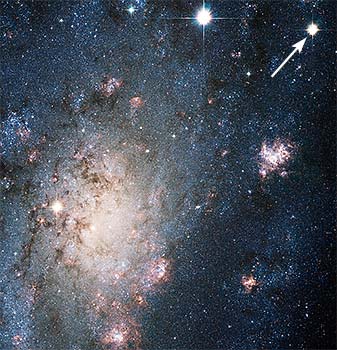 From the press release issued by the Space Telescope Science Institute:

The heart of NGC 2403 is the glowing region at lower left. Sprinkled across the region are pink areas of star birth. The myriad of faint stars visible in the Hubble image belong to NGC 2403, but the handful of very bright stars in the image belong to our own Milky Way Galaxy and are only a few hundred to a few thousand light-years away. This image was taken on Aug. 17, two weeks after an amateur astronomer discovered the supernova.

What we’re seeing here is the creation of heavy chemical elements like calcium, iron and gold, all of which, on Earth and elsewhere, came from explosions like this one.