Alpha Centauri and other nearby stars seem impossible destinations not just for manned missions but even for robotic probes like Cassini or Galileo. Nonetheless, serious work on propulsion, communications, long-life electronics and spacecraft autonomy continues at NASA, ESA and many other venues, some in academia, some in private industry. The goal of reaching the stars is a distant one and the work remains low-key, but fascinating ideas continue to emerge. This site will track current research. I’ll also throw in the occasional musing about the literary and cultural implications of interstellar flight. Ultimately, the challenge may be as much philosophical as technological: to reassert the value of the long haul in a time of jittery short-term thinking.

Above: Alpha and Beta Centauri are sometimes known as ‘The Pointers,’ since they lead the eye to the Southern Cross. This stunning image, taken in June of 2001, is the work of Italian amateur astronomer Marco Lorenzi, and is used with his permission. Note that the bright image of Alpha Centauri (far left) actually comprises Centauri A, Centauri B and the insignificant light of Centauri C (Proxima Centauri); details of each are lost in the glare. Beta Centauri is not a part of the Alpha Centauri triple-star system. You can see other photographs from Marco’s collection at his Web site. Of particular interest is his description of the methods he used to capture this image; you can find that here.

I’m Paul Gilster. Although I’ve been writing about technology for over twenty years now, my focus has largely been on computing and the Internet. But behind the scenes I’ve continued to nurse an active interest in space travel, and the ultimate challenge: finding a way to reach the nearest stars. I have no idea whether people will ever travel between the stars or not, but I’m becoming convinced that robotic probes to explore nearby systems are forseeable. It was because of that conviction that I wrote my book Centauri Dreams: Imagining and Planning Interstellar Exploration (Copernicus, 2004), which focuses on the active research now being done to make this goal a reality. 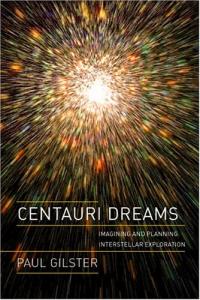 I don’t think we’ll see a robotic interstellar probe until late in this century, if then, but that doesn’t matter. Building a star-faring craft is something like building a cathedral: it will take the combined efforts of scientists and engineers through several generations to make it happen. The most optimistic mission scenarios take almost fifty years to reach Alpha Centauri, and many concepts take centuries to get there, meaning each generation of scientists will be handing the probe off to the next. Nursing the kind of long-term thinking that might build an interstellar probe — and the cultural imperative of passing along things of value to the future — is a key theme in all my work.

I’ve been a full-time writer for the past twenty years. Before that, I went to graduate school in medieval literature and (like all medievalists) went on to become a flight instructor, specializing in commercial and instrument training. My decision not to pursue an academic career was based on my aversion to academic politics and their self-perpetuation through tenure (not to mention the scarcity of teaching jobs!) My interests are wide and I like to mix personal observations and recollections into all my work, so don’t be surprised to see the occasional film noir or science fiction novel surface in these musings or — who knows — thoughts on the medieval world I admire so much for its commitment to future generations.