Back when I was a kid gawking at images from the Palomar telescope, it seemed that the only way to see farther and better was to build bigger mirrors. We’ve learned how to do that, of course, but new techniques from adaptive optics to space-borne coronagraphs have made it possible to see things never before revealed. The latest weapon in the astronomers’ arsenal is to me the most fascinating; it’s the use of computers to combine imagery and tease out new information. The National Virtual Observatory is a case in point, creating the tools needed to maintain interoperating databases. “In a few years it will be easier to “dial-up” a part of the sky than wait many months to access a telescope,” according to the NVO’s Web site. 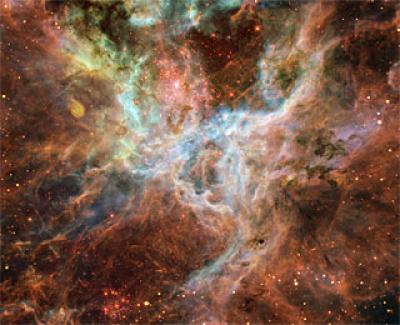 And now we’ve got this remarkable image of 30 Doradus, the Tarantula Nebula. 30 Doradus is located in the Large Magellanic Cloud some 170,000 light years from Earth. A small, irregular galaxy that orbits the Milky Way, the LMC seems to be a region of active star formation; its interactions with the larger galaxy are what apparently energized its star-building activity. The Tarantula Nebula is said to be the largest ‘stellar nursery’ known. This image comes from Hubble data that include more than a thousand observations of the Tarantula Nebula; be sure to click it to call up a higher-resolution version.

And here’s the kicker: this gorgeous depiction is the work of a 23-year old amateur astronomer named Danny LaCrue, who studied the Hubble data and combined 15 of the exposures from Hubble’s Wide Field and Planetary Camera 2. To create this image, LaCrue downloaded and worked with a software tool called FITS Liberator, available at the European Space Agency’s Hubble page. FITS stands for Flexible Image Transport System, a format designed for astronomical images.

You may have read Timothy Ferris’ wonderful Seeing in the Dark (New York: Simon & Schuster, 2003), which recounts the contributions amateur astronomers are making to this worldwide enterprise. It’s clear that digital tools will yield more and more surprises as our computers become more powerful and can tap into data available to all.

The ESO/ST-ECF Science Archive, where LaCrue found his data, is here, if you’d like to try your hand at this kind of work. And here is a thorough backgrounder on the Large Magellanic Cloud.