Other than high-energy particle accelerators, where on Earth would you look for antimatter? The answer seems to be high above Antarctica. A team of scientists led by Akira Yamamoto of Japan’s High Energy Accelerator Research Organization (KEK) is actively hunting antimatter that may be striking the Earth from space. The detector: an instrument carried by a 40-million cubic foot balloon that is circling the South Pole at an altitude of 39 kilometers (24 miles). If successful, the team will learn a good deal about antimatter and may prove the existence of so-called Hawking radiation, low-energy antiprotons created by ancient black holes from the Big Bang era. 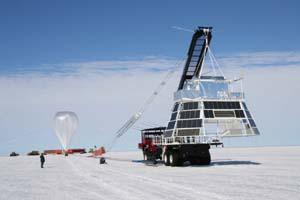 Called BESS-Polar (Balloon-borne Experiment with a Superconducting
Spectrometer), the experiment is a collaborative effort that unites KEK and various Japanese agencies including the Japan Aerospace Exploration Agency with NASA. BESS has been tested in Canada and used to study cosmic rays; it also collected a small number of low-energy antiprotons, but the new venue in Antarctica may yield a much greater windfall. With the continent now in constant daylight, there are no day-night temperature fluctuations to contend with, allowing the balloon to remain at altitude longer. “We journeyed to the bottom of the world so that we could get a nice, long flight,” said Project Manager Prof. Tetsuya Yoshida of KEK. “Longer flights mean better statistics.”

One problem BESS-Polar may help us gain insight into is where antimatter went after the Big Bang. Theoretically, equal amounts of matter and antimatter should have been created, but the universe seems dominated by ordinary matter. Physicist John Cramer theorizes that the early universe had 100,000,001 protons for every 100,000,000 antiprotons; he calls the electrons and protons of the visible universe, in a wonderful phrase, “…the few ragged survivors of the ‘antimatter wars’ of 16 billion years ago.” BESS-Polar will be attempting to discover whether where are any large areas of antimatter that survived those primordial wars. (And if you aren’t familiar with Cramer’s ‘Alternate View’ columns in Analog, be sure to check his online venue).

Centauri Dreams‘ take: the more we learn about antimatter, whether from primeval black holes or accelerators, the closer we’ll be to powerful new forms of propulsion. Steve Howe’s wonderful antimatter sail concept seems a practical way to design a mission to the Kuiper Belt, but even it would require more antimatter than we can currently produce, and a Centauri mission would demand vast amounts by today’s puny production standards. Nonetheless, we’re learning how antimatter could be used to create fusion reactions in concepts like Magnetically Insulated Inertial Confinement Fusion, which University of Michigan professor Terry Kammash continues to develop. Clearly, antimatter has a key role to play in getting us out of the Solar System.

The BESS home page is here. To track BESS via GPS, go to the Antarctic Operations site. The KEK press release on BESS is available here.