The UK’s new Wide Field Camera (WFCAM) has just begun operations at the United Kingdom Infrared Telescope site in Hawaii. WFCAM is designed to survey huge swathes of the sky at infrared (heat radiation) wavelengths, and should be able to work with deep sky objects as well as close brown dwarfs and other stars that, although relatively nearby, may have eluded detection. 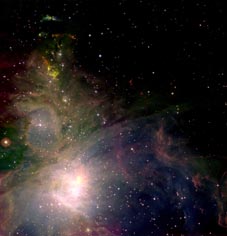 The ‘survey’ part of its job description means WFCAM is designed for a large field of view; no other infrared camera now operating can equal its range. The early results are spectacular. The two images shown here are among the earliest made by WFCAM. They focus on the area of intense star formation in the constellation Orion, some 1500 light years from Earth. To give you an idea of this telescope’s range, the full images it made of this region are 3600 times larger than Hubble’s infrared camera. By varying the type of infrared filters, the new camera shows thousands of young stars that would ordinarily be hidden by gas and dust at the wavelengths of visible light. Be sure to click on each image for higher resolution versions.

Image: Central region of the full tile, showing dramatic clouds of gas and dust illuminated by stars in the southern half of the Orion nebula. This is an image at three infrared wavelengths (red represents narrow-band emission from molecular hydrogen gas at 2.12 microns, green represents K-band emission at 2.2 microns, and blue represents J-band emission at 1.25 microns). The region is 11 light years across.

Talk about data glut: the four detector arrays that WFCAM uses create image tiles of 250 million pixels each. A single night of scanning will produce over 200 gigabytes of data. Centauri Dreams has commented before about the data deluge in astronomy; we need far better tools not so much for acquiring data as for mining it, which is why the developing idea of ‘virtual observatories’ that can combine these huge repositories to do meaningful science is taking hold. We’ll look at the concept again soon with an upcoming story on the new Virtual Solar Observatory, which combines fifty different data archives. 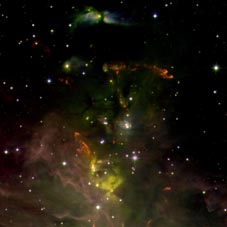 Centauri Dreams‘ take: It seems possible that what we call the nearest star — the Alpha Centauri triple star system — is in fact only one of many nearby stars. M-class red dwarfs can be hard to spot. Indeed, the idea that there is a companion star to our Sun, perhaps a brown dwarf, has never been fully discounted. Dubbed ‘Nemesis’ because of the theory that its periodic approaches might disturb the Oort Cloud and result in species extinction events on Earth, the object had a brief but sensational history in the press, although no observational evidence for its existence has ever been found.

If it did exist, cameras like WFCAM would make searching for Nemesis much more effective. More likely than a Nemesis find, though, would be the discovery of nearby stars like the red dwarf SO25300.5+165258. First observed in 2003, it is only 7.8 light years away, making it the third closest to the Sun (after the Centauri system and Barnard’s Star). The suspicion here is that there are many more close objects, including some less distant than Alpha Centauri.

Next post: Understanding Massive Terrestrial Worlds Around Other Stars