290 miles northeast of San Francisco, the University of California at Berkeley and the SETI Institute are building an observatory for galactic and extragalactic radio astronomy at Hat Creek. The Paul Allen Telescope Array (ATA 32), named after Microsoft co-founder Paul Allen, who is a major donor for the project, is to consist of 350 networked 6.1-meter radio dishes spread out along 2.6 acres on the property. In addition to breakthrough radio astronomy, ATA 32 will enable the most comprehensive search for intelligent extraterrestrial signals (SETI) ever attempted. 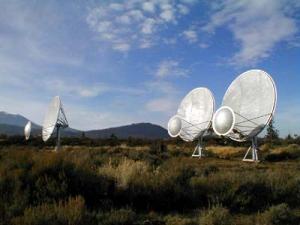 According to this Lab Note by David Pescovitz at Berkeley’s College of Engineering , the Allen Telescope Array will speed up the SETI search by a factor of 100. Significantly, the system is designed so that astronomers can do other radio astronomy while the SETI search proceeds. Pescovitz quotes William “Jack” Welch, a UC Berkeley professor of electrical engineering and astronomy who holds UC Berkeley’s first Chair in the Search for Extraterrestrial Intelligence: “SETI is admittedly a long-shot…I don’t have the patience to do only that, so it appeals to me to have a steady flow of other data for us to study as well.”

Image: Three prototype radio dishes now in place at Hat Creek Observatory in northern California. By 2007, 350 of these 6.1-meter-diameter dishes will be assembled to form the Allen Telescope Array, the largest radio array in the world. Credit: Radio Astronomy Laboratory.

Which is putting the issue mildly, for the odds against a SETI detection are immense. Centauri Dreams is an advocate of SETI as long as donors with deep pockets can be found — as is the case here — and only if the instruments used are capable, as Hat Creek will be, of tandem work, expanding our knowledge of the universe through more conventional radio and optical observations. The latter is far more likely to yield substantive results, but the implications of a successful SETI hunt are significant enough to justify continuing that effort when possible.

From an astronomer’s point of view, the Hat Creek observatory offers key advantages. It will be capable of studying transient events like supernovae and gamma ray bursts through the whole sky on a nghtly basis. And the range and flexibility offered is immense. From a useful backgrounder on the project:

The telescope will have unprecedented sensitivity over a large range of wavelengths centered in the centimeter radio band, spanning the equivalent of about four and a half octaves, whereas most radio telescopes span less than half an octave and optical telescopes span perhaps one or two. The wavelength range stretches from 2 to 50 centimeters, including the important 21.1-centimeter radio emissions of cold hydrogen that have allowed astronomers to map the Milky Way galaxy’s spiral arms.

Three prototype dishes are currently in place at Hat Creek, but several dozen more should be operational by summer of 2005. The observatory’s scalable design allows serious astronomy work to begin almost immediately, though at a much lower resolution than will one day be available.