The Mars Express conference being held at the European Space Research and Technology Centre in the Netherlands runs through the 25th, and as we saw yesterday is already generating its share of high quality data. The program for the meeting can be found here. Of particular interest will be the special session on exobiology and the hunt for life on Mars that will be held on Thursday the 24th. We should get more information about that conjectural Martian ocean (discussed yesterday) at that gathering. 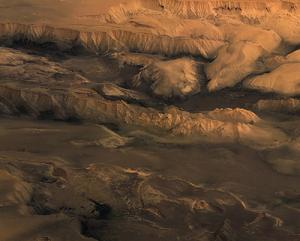 Meanwhile, six papers published online by the journal Science have brought forth new findings about the early history of Mars. “If you want to resolve the big question about life on Mars, you want to go to the right places and get samples,” said Brown University’s John Mustard. “The new research tells us where some of those places may be.” Mustard is part of an international team using data from the Mars Express OMEGA spectrometer that is mapping the surface of the planet in both visible and infrared light.

Image: Taken by the High Resolution Stereo Camera (HRSC) on board ESA’s Mars Express spacecraft, this view shows the central part of the 4000-kilometre long Valles Marineris canyon on Mars. Valles Marineris was named after the US Mariner 9 probe, the first spacecraft to image this enormous feature in 1971. Here, the huge canyon which runs east to west is at its widest in the north-south direction. Credit: European Space Agency.

The data suggest that Syrtis Major, Valles Marineris and Terra Meridiani would all be uniquely interesting for future rock and soil sampling. You can read more about the OMEGA data in this Brown University press release. Interestingly enough, one finding is that Mars’ northern lowlands are composed of volcanic rock unaltered by water, making the theory that an ocean once covered the area less likely.

Another view of the Mars Express findings comes from the article Mars Express scuppers greenhouse hopes, which appeared on the 17th on the Nature.com site. Author Roxanne Khamsi talked to Jean-Pierre Bibring, OMEGA’s principal investigator, along with a British geophysicist. From the article:

Early Mars could have kept warm with a blanket of carbon dioxide that would have absorbed and re-radiated heat lost from the surface. Such a greenhouse effect would have raised the temperature enough for water ice to melt. “But everything points to the fact that Mars lost its atmosphere early on,” says Bibring.

After a global survey, Mars Express has found none of the carbonate minerals that would form under a dense carbon-dioxide atmosphere. This makes it unlikely that the planet ever experienced significant greenhouse warming, contrary to some scientists’ expectations. “In a sense, we’ve been barking up the wrong tree for 20 years,” says planetary geophysicist Lionel Wilson of the University of Lancaster, UK.

Thursday’s meeting may be contentious as competing theories — about how oceans may have formed and the significance of atmospheric methane, among other things — clash. On the situation in the northern lowlands, see in particular Mustard, Poulet, Gendrin et al, “Olivine and Pyroxene Diversity in the Crust of Mars,” published February 17, 2005 on Science’s online site. ESA’s Mars Express page is here.