A Galaxy Made of Dark Matter

Ordinary (or baryonic) matter — the stuff that you and I and Procyon are made of — is outnumbered five to one by so-called ‘dark matter,’ mysterious stuff whose presence can only be inferred from the way galaxies rotate. Some galaxies rotate so fast that, if they were made only of ordinary matter, they would fly apart. So some stronger gravitational force must be involved, even though we can’t see what’s causing it. Now an international team of astronomers has found a valuable clue in the form of a galaxy that is all but invisible.

VIRGOHI21 was found in the Virgo cluster of galaxies some 50 million light years from Earth, and is the first galaxy ever detected that is made up almost entirely of dark matter. Observed by radio telescopes at the University of Manchester and Arecibo (and later studied at the Isaac Newton Telescope in the Canary Islands), the galaxy contains a mass of hydrogen atoms a hundred million times larger than the Sun. The mass rotates, just like a galaxy, but contains no stars; dark matter is considered the glue that holds the hydrogen together. 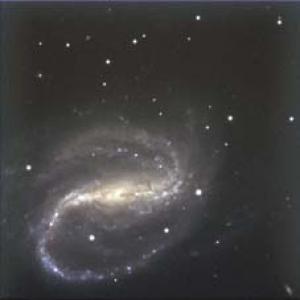 What makes a dark galaxy form? The likelihood is that the density of matter there is too low to allow star formation, but a disc of rotating hydrogen remains. Says Dr Robert Minchin from Cardiff University, one of the UK astronomers who discovered the galaxy, “”From the speed it is spinning, we realised that VIRGOHI21 was a thousand times more massive than could be accounted for by the observed hydrogen atoms alone. If it were an ordinary galaxy, then it should be quite bright and would be visible with a good amateur telescope.”

Image: The type of galaxy that astronomers would have expected to see, based on the measurements taken. It is not an image of the object discovered – merely a basis for comparison. Image of Galaxy NGC 7479 taken by Nik Szymanek. Image obtained with the Faulkes Telescope North, Maui, copyright FTLLC.

A press release from the Particle Physics and Astronomy Research Council (UK) gives this background information about dark matter:

Astronomers have been measuring the way in which stars and galaxies move for many years. These measurements indicate that there must be far more matter in the Universe than can be accounted for by the visible light we see. This ‘dark matter’ still holds many mysteries for astronomers – is it well mixed up amongst the stars, or is it separate from the stars? Another puzzle is that the current ideas about how galaxies form predict that there should be many more galaxies in the Universe than are visible to us. So, these two ideas – dark matter and the lack of galaxies – have led some astronomers to predict that there must be unseen ‘dark’ galaxies hidden in the Universe.

The paper growing out of this work is Minchin, R. et al., “A Dark Hydrogen Cloud in the Virgo Cluster,” which will be published in the Astrophysical Journal. An online preprint can be found here. New Scientist is also running an account of the dark galaxy find.