The recent finding of a possible ancient sea on Mars has been one of the hotter topics at the ESA Mars Science Conference. The research team, led by John Murray of the UK’s Open University, presented its findings at the conference on the 21st, with a paper coming up in Nature next month. One team member, Jan-Peter Muller of University College London had this to say about the significance of the find:

“The fact that there have been warm and wet places beneath the surface of Mars since before life began on Earth, and that some are probably still there, means that there is a possibility that primitive micro-organisms survive on Mars today. This mission has changed many of my long-held opinions about Mars – we now have to go there and check it out.” 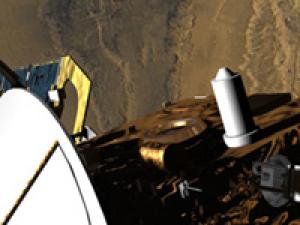 Amen to that, since even with instruments like Mars Express’ High Resolution Stereo Camera, which offered up the 3D images used in this work, we need hard evidence from the surface before we can claim that life is anything more than a possibility. But until then, news of water near Mars’ surface continues to be tantalizing. The team believes the water, which would have erupted about five million years ago in the form of a catastrophic flood, was originally about 45 meters deep, something like Earth’s North Sea.

How much ice is still there? Here’s what a press release from University College London has to say:

The pack-ice floes have drifted into obstacles, and in places have become grounded on islands when the water level dropped, but the very flat surface (similar in slope to water surfaces in estuaries on Earth when the tide is coming in) and the thick ice within enclosed craters suggests that most of the ice is still there. Ice is unstable at the surface of Mars because of the low atmospheric pressure, and sublimes away (changes straight from ice to vapour without passing through the liquid state) into the atmosphere, but the frozen sea appears to have been protected from this by a layer of volcanic ash and dust.

Coming up in May is the deployment of the Mars Express MARSIS experiment, which is theoretically capable of finding ice beneath the surface, thus confirming the discovery. Adding to the interest in the Cerberus Fossae region is the higher concentration of methane in the area where the pack ice was discovered, another possible life indicator.

The upcoming Mars paper is Murray, Muller, Neukum et al, “Evidence from the Mars Express High Resolution Stereo Camera for a frozen sea close to Mars’ equator,” which will run in Nature on March 17.