Building the first interplanetary laser link, a project known as the Mars Laser Communications Demonstration, will be one of the topics discussed at an upcoming conference in Anaheim. The gathering targets the latest developments in optical technologies from key players in the industry, but it’s the use of lasers for space communications that catches Centauri Dreams‘ eye. As we go deeper and deeper into the Solar System and beyond, we’ll need these technologies to allow for effective data return.

Ponder this: because radio signals fall off in intensity with the square of their distance, a spacecraft twice as far from Earth sends a signal with four times less strength. The 23-watt signal of Voyager has spread to a beam width 1000 times the diameter of Earth by the time it reaches us. The Jet Propulsion Laboratory’s James Lesh says that makes the Voyager signal twenty billion times less powerful than what it takes to run a digital wristwatch. Move to Alpha Centauri and the dropoff becomes staggering.

Lasers are one way around the issue because going up to higher frequencies (shorter wavelengths) results in a much narrower signal, and one that can carry more information. That keeps laser signals from competing for spectrum space the way radio signals do in the crowded RF environment of the Deep Space Network. Laser communication methods also demand less power and the optical telescopes they would use aboard spacecraft can be significantly smaller than today’s radio dishes. 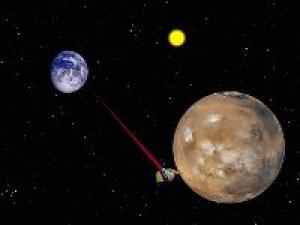 We’ve had laser tests before, including GOPEX —- the Galileo Optical Experiment– which trasmitted laser signals to the Galileo spacecraft as it moved past Earth in its long trajectory to Jupiter, and GOLD — the Ground-to-Orbit Laser Communication Demonstration — in which a laser signal was transmitted from the JPL Table Mountain facility to a Japanese satellite. The European Space Agency’s SMART-1 moon probe also carries laser equipment, successfully tested in 2004 with ESA’s optical ground station in the Canary Islands.

Image: A bright future for space communications: a telescope with laser transmitter in Mars orbit acts as a communications relay for Mars probes to send their data back to Earth at high data rates in a beam of light. (Credit: Assembled by the Anglo-Australian Observatory using NASA planetary images.)

The Mars Laser Communications Demonstration is designed to push information at 30 million bits per second, ten times faster than the best interplanetary radio links we now have. It’s scheduled to fly on the Mars Telecommunications Orbiter, with launch some time in 2009. The 5-metre Hale Telescope in southern California and an array of four 0.8-metre telescopes (location not yet announced) will serve as detection sites on the ground.

The Optical Fiber Communication Conference and Exposition/National Fiber Optic Engineers Conference will begin on March 6 and last until the 11th. Don Boroson of the MIT Lincoln Laboratory will provide an overview of the Mars project, along with the technical challenges (accurate pointing is a major issue, as is ground reception during times of cloud cover). Boroson’s paper is “The Mars Laser Communications Demonstration Project: Truly Ultralong-Haul Optical Transport.” A background paper on the MLCD project can be downloaded here. Also see Mars laser will beam super-fast data, an article by Maggie McKee in New Scientist.