Autonomy and the Hunt for Life

As our space probes go deeper into the Solar System and beyond, they’ll be required to become fully autonomous, making decisions about courses of action in space or on distant planetary surfaces. Each time we test a technology in a nearby environment, we’re building toward such autonomy. Consider the announcement that Carnegie Mellon scientists have discovered life with an automated rover — life here on Earth, that is.

The scene is Chile’s Atacama Desert, a harsh, dry region that acts as a surrogate for the even more hostile Martian terrain. “Life in the Atacama” is a three-year program designed to develop techniques for life detection via remote sensing. The group chose the region because it is one of the most arid on Earth, where rain is so rare that it is measured in millimeters per decade, and the high elevation makes solar radiation intense. Here, a rover named Zoë is deploying new technologies in the hunt for life.

Carnegie Mellon’s Alan Waggoner has been presenting results of Zoë’s life detection experiments to the 36th Lunar and Planetary Science Conference (March 14-18) in Houston. The rover has been able to detect lichen and bacterial colonies in the most arid parts of the desert. According to Waggoner, who is director of the Molecular Biosensor and Imaging Center at the university’s Mellon College of Science:

“We saw very clear signals from chlorophyll, DNA and protein. And we were able to visually identify biological materials from a standard image captured by the rover.

“Taken together, these four pieces of evidence are strong indicators of life. Now, our findings are being confirmed in the lab. Samples collected in the Atacama were examined, and scientists found that they contained life. The lichens and bacteria in the samples are growing and awaiting analysis.” 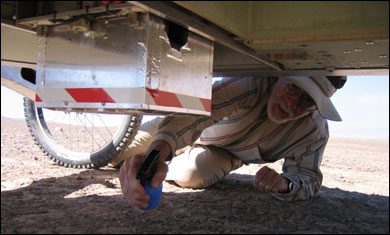 Image: Alan Waggoner, Atacama team member and director of the Molecular Biosensor and Imaging Center at Carnegie Mellon, crouches next to Zoë, a robotic rover, to spray the life-detection probes onto the sample area. In the future, the probes will be sprayed from instrumentation located underneath the rover. Credit: Carnegie Mellon University.

Waggoner’s team uses a fluorescence imager installed beneath the rover to detect signals from chlorophyll-based life, and deploys special dyes that light up only when they bind to nucleic acids, protein, lipids or carbohydrates. The system can function in full daylight using the shade of the rover for protection, a useful feature since Zoë needs solar power to operate. A remote science team in Pittsburgh gave the rover operating instructions while a ground team collected rover samples for examination in their own laboratories. The results: not a single false positive. Every sample the rover reported as positive for bacteria was found to contain bacteria.

Centauri Dreams‘ take: Plans call for Zoë to operate eventually with full autonomy, traveling with a complete instrumentation package up to 50 kilometers in a two-month period. This is technology with great implications for the hunt for life on Mars, and it points the way to the kind of automated systems we’ll use not only on Titan but much farther afield as we move into the Kuiper Belt. You can read more in this article in Carnegie Mellon Today. Field reports, including images and movies from the Atacama project, can be found here.