Defining Habitable Zones in the Galaxy

When is a planet habitable? The assumption, in studies of the ‘circumstellar habitable zone’ (CHZ) ranging back as far as 150 years, is that a planet is habitable if liquid water can be maintained on its surface. That this is a ‘life as we know it’ scenario is obvious: it works best if you assume a planetary system not so different from our own, one with roughly the same configuration of planets (gas giants in outer orbits, rocky worlds in close). Venus and Mars have served as test cases of the boundaries of habitable zones.

But our view of habitable zones is evolving. I relied on Stephen Dole’s groundbreaking study Habitable Planets for Man (New York: Blaisdell Publishing Company 1964) in Centauri Dreams. Dole’s work was prepared for the RAND Corporation, and was released in popularized form as Planets for Man, in collaboration with Isaac Asimov (New York: Random House, 1964). Dole defined a stellar ecosphere as “. . . a region in space, in the vicinity of a star, in which suitable planets can have surface conditions compatible with the origin, evolution to complex forms, and continuous existence of land life; and, in particular, surface conditions suitable for human beings, together with the whole system of life forms on which they depend.”

The habitable zone concept has a long history. In an 1853 book called Of the Plurality of Worlds, William Whewell proposed that a ‘temperate zone’ existed where the Solar System was inhabitable. His work was extended by Alfred Russel Wallace in Man’s Place in the Universe (1903), and later Hubertus Strughold introduced the concept of the ‘ecosphere’ as it applied to conditions around the Sun (“The Ecosphere of the Sun,” Aviation Medicine 26, pp. 323-328, 1955). In 1959, Su-Shu Huang discussed the variations in the Earth’s temperature that would occur if it were moved closer or farther from the Sun (“Occurrence of Life in the Universe,” American Scientist 47, pp. 397-402).

It was Michael Hart’s 1979 study “”Habitable Zones About Main-Sequence Stars” (Icarus 37, pp. 351-357) that produced a mathematical model of the circumstellar habitable zone, with an inner boundary marked by runaway greenhouse effects and an outer one by runaway glaciation. Hart’s habitable zone was tiny: the Solar System was friendly to life between 0.958 and 1.004 AU.

Following Hart, a number of studies continued to explore the CHZ with models that took into account our deepening understanding of the greenhouse effect and changes in planetary geophysical processes. But all in all, the concept of a habitable zone between 0.95 and 1.2 AU settled in for our own Solar System, a widening of Hart’s parameters but not by much. This was more or less the conclusion that Dole reached in his 1964 study.

A thorough analysis of work on the concept since Hart now appears in Guillermo Gonzalez’ paper Habitable Zones in the Universe. Gonzales explains why he believes we should keep the habitable zone concept despite our broadening view of where life might exist, including liquid biospheres in the interior of icy moons like Europa and Callisto:

Although these places are located outside the traditional CHZ, some argue that they should also be called habitable zones. Nevertheless, there are several reasons to keep the traditional definition. First, one of the primary motivations for study of the CHZ is to learn how to detect habitable terrestrial planets in other systems. Since we know Earth has been inhabited most of its history, finding another planet like Earth is probably the surest bet to find another inhabited planet. Second, since life requires much more than just liquid water, merely locating other pockets of liquid water will not suffice. Each new potential niche will have to be evaluated on its ability to supply the necessary ingredients for life in the right forms. It has yet to be demonstrated that these other niches can harbor life. 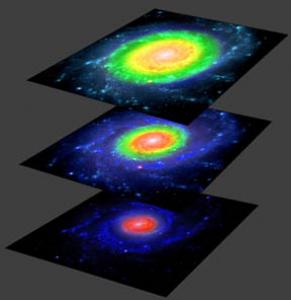 If we move beyond stellar habitable zones, we can talk about a galactic habitable zone, one that considers the effects of nearby supernovae and gamma ray bursts, and takes into account the orbits of comets as they may be subject to large-scale gravitational perturbations. Encounters with nearby stars must also be considered. The largest galactic picture studies the metallicity of star-forming nebulae and the evolution of stars in various environments. A full treatment of the concept is “The Galactic Habitable Zone and the Age Distribution of Complex Life in the Milky Way,” by Charles Lineweaver, Yeshe Fenner and Brad Gibson, which ran in Science’s January 2, 2004 issue. The article is also available online (PDF warning).

Image: The formation and expansion of the Habitable Zone of the Milky Way Galaxy. In the early stages of galaxy formation (lower panel) there were not enough heavy elements to form terrestrial planets except in the most central regions of the Galaxy, where the danger due to nearby supernovae was very high (shown in red). As heavy elements spread through the Galaxy, terrestrial planets formed and a habitable zone emerged and broadened (shown in green in the upper panels). Credit: Swinburne University, Australia.

A galactic habitable zone also takes into account the concept of Cosmic Habitable Age, the period during which a universe can be inhabited — after all, life cannot form in a cosmos before atoms have formed, or after the stars have burned out. An intriguing 2003 study by Werner von Bloh and colleagues calculated the peak time for Earth-like planets to appear and found it to be near the time of formation of our own Earth.