When Freeman Dyson recently addressed Flight School (a part of the PC Forum technology conference held in Scottsdale AZ in March), he cited one key driver for getting people into space in a big way: propulsion. “What you need,” Dyson said, “is a launch system that stays on the ground.”

A case in point that Dyson favors is laser propulsion, as exemplified in the ‘lightcraft’ concept of Rensselaer Polytechnic Institute’s Leik Myrabo. Back in October of 2000, a small test model of Myrabo’s design rose to a height of 233 feet, powered by a 10-KW pulsed carbon dioxide laser. Beamed energy means that future, full-scale versions of such technology will need only a small amount of on-board propellant, sharply reducing the mass of the vehicle.

The lightcraft models created so far reflect the laser beam from a parabolic mirror on the underside of the vehicle to superheat air to a temperature roughly ten times that of the surface of the Sun. The air explodes and propels the craft into motion, with each new laser pulse driving it further. Running out of usable air as it pushes toward the edge of space, a future full-sized vehicle would switch to an on-board supply of liquid hydrogen for propellant. 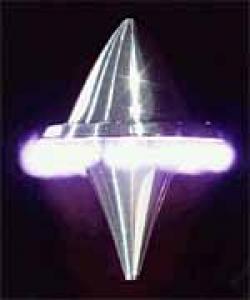 Dyson told the Arizona crowd that a full-scale lightcraft — one capable of launching people in a Volkswagen-sized vehicle — would need a 1,000 megawatt laser (the Airborne Laser system created by Boeing, Lockheed Martin, and Northrop Grumman for the U.S. Air Force, by comparison, involves a 5 to 10 megawatt-class chemical laser).

But Myrabo knows bigger lasers are coming. His goal is a thousand-fold reduction in the cost of reaching orbit. When I spoke to him while researching Centauri Dreams, he was emphatic about not standing still while waiting for laser technology to catch up:

There is a way to make significant progress with flight platforms using alternative fuels, waiting for that big laser. So I’m exploring alternatives. One other problem is dynamic stability control issues, which we have to address, but I think the future is wide open. And I don’t see any other propulsion technology that’s really in the running for extremely reliable and cheap access to space. Single stage to orbit is very difficult to do with chemicals.

On beamed propulsion, see the classic paper by Arthur Kantrowitz, “Propulsion to Orbit with Ground-Based Lasers,” in Astronautics and Aeronautics 10, no. 5 ( May 1972), pp. 74–76. Also useful for background is Leik Myrabo and Dean Ing, The Future of Flight (New York: Baen Books, 1985). Myrabo’s Lightcraft Technologies Web page is rarely updated, but may be worth the occasional check. “I don’t talk about what I’m doing until I do it,” the scientist says. Finally, be aware of the article “Orbital Oddballs: Unusual Ideas for Future Space Travel,” which ran last November in Strange Horizons.