Emergence of the ‘Dark Energy Star’

“It’s a near certainty that black holes don’t exist,” says George Chapline. A physicist at the Lawrence Livermore National Laboratory, Chapline has an alternative explanation: when a massive star collapses, what remains is not a black hole but a star that’s filled with dark energy. Some 70 percent of the universe seems to be composed of dark energy, though no one knows precisely what it is. Chapline’s work may lead to new insights into the stuff.

A preprint of Chapline’s paper “Dark Energy Stars” appears at the ArXiv site, where the author lays down the gauntlet early on:

In the 1950s a consensus was reached, partly as a result of meetings such as a famous meeting at Chapel Hill in 1957, that although quantum effects might be important below some very small distance, on any macroscopic scale the predictions of classical general relativity (GR) should be taken seriously. In the
summer of 2000 Bob Laughlin and I realized that this cannot possibly be correct. Indeed I am sure it will be a puzzle to future historians of science as to why it took so long to realize this.

The picture of gravitational collapse provided by classical general relativity cannot be physically correct because it conflicts with ordinary quantum mechanics. 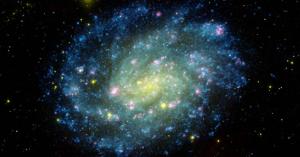 Strong assertions, but we have to come to grips with the apparent conflict between general relativity, where universal time does not exist and clocks operate at different speeds depending on their situation, and quantum mechanics, which demands a universal time for its equations to work. An event horizon, as postulated around the now familiar concept of a black hole, “…makes it impossible to everywhere synchronize atomic clocks,” according to Chapline.

Image: The spiral galaxy NGC 300. Black holes are thought to lurk at the center of many such galaxies, but are they really huge stars filled with dark energy? Credit: Jet Propulsion Laboratory.

The upshot is that when a star collapses, space-time inside it goes through a ‘quantum phase transition’ into dark energy. The dark star’s negative gravity could cause matter, once sucked in, to re-emerge. A story on Nature.com explains the result:

If the dark-energy star is big enough, Chapline predicts, any electrons bounced out will have been converted to positrons, which then annihilate other electrons in a burst of high-energy radiation. Chapline says that this could explain the radiation observed from the centre of our galaxy, previously interpreted as the signature of a huge black hole.

He also thinks that the Universe could be filled with ‘primordial’ dark-energy stars. These are formed not by stellar collapse but by fluctuations of space-time itself, like blobs of liquid condensing spontaneously out of a cooling gas. These, he suggests, could be stuff that has the same gravitational effect as normal matter, but cannot be seen: the elusive substance known as dark matter.

Centauri Dreams‘ note: Chapline’s theories are one way to explain gamma-ray bursts, a subject we looked at just yesterday. Matter falling onto the surface of a dark energy star could trigger these phenomena, the result of interactions among the decay products as the matter re-emerges from the star.

Next post: GQ Lupi B: Exoplanet or Brown Dwarf?