Physical Constant Unchanged After All?

More on the ‘fine structure constant,’ that fundamental number that seems to be crucial to our understanding of electromagnetism, and therefore the way the universe works. Our recent story on Michael Murphy and his Cambridge team discussed findings from the Keck I telescope on Mauna Kea that suggested subtle changes to the value of the fine structure constant since the earliest era of the universe. But those findings remain highly controversial, as was apparent on Monday the 18th.

That was the day that astronomer Jeffrey Newman (Lawrence Berkeley National Laboratory) presented data from the DEEP2 redshift project, a five-year survey of galaxies more than seven light years away. Speaking at the annual meeting of the American Physical Society (APS) in Tampa, Newman said his team’s results showed no change to the constant within one part in 30,000.

“The fine structure constant sets the strength of the electromagnetic force, which affects how atoms hold together and the energy levels within an atom. At some level, it is helping set the scale of all ordinary matter made up of atoms,” Newman said. “This null result means theorists don’t need to find an explanation for why it would change so much.” 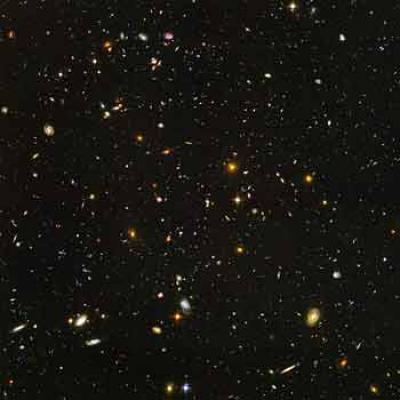 Consider the fine structure constant a ratio of other constants. Designated by the Greek latter alpha, the constant is equal to the square of the charge of the electron divided by the speed of light times Planck’s constant. Some theories suggest that alpha would change only if the speed of light changed over time.

Image: From the Hubble Ultra Deep Field, a snapshot of galaxies in various ages, sizes, shapes and colors. Studying the light of such objects may help us discover whether or not the fine structure constant has changed over time. Credit: NASA, ESA, S. Beckwith (STScI) and the HUDF Team.

Although DEEP2 was not designed to probe such matters, Newman realized that a study of the oxygen emission lines from distant galaxies would provide suitable data to study the question. The team compared emission lines for galaxies at varying distances. Murphy’s team, on the other hand, had looked at absorption lines in the spectra of distant quasars. Astronomer John Bahcall (Institute for Advanced Study) pointed out some years ago that when it came to measuring the fine structure constant, studying emission lines from distant galaxies would be less error-prone than measuring absorption lines.

Centauri Dreams note: The fine structure constant remains controversial, but DEEP2 is provocative in more ways than this. This massive survey of distant galaxies should provide insights into how the universe itself has evolved. Moreover, its measurements will be a useful yardstick against which to measure various models of dark energy, that mysterious force that seems to be causing the expansion of the universe to accelerate. While Newman released data from the survey’s first year of operation (2002), the full release will have to wait until 2007. The survey finishes its observations this summer. You can read more in this UC Berkeley news release.