When theories aren’t borne out by observation, the problem just may be the size of the dataset. As witness recent work on gravitational lensing, that phenomenon where light is distorted and magnified by the gravitational pull of galaxies and other matter as it makes its immense journey from distant quasars to the Earth. Such lensing has been observed for over a decade, but just how the light is magnified, and on what scale, has until now been an elusive question. And answers to it haven’t seemed to fit the standard model of cosmology, one in which visible galaxies represent only a small part of the mass of a universe seemingly filled with dark matter.

Now researchers from the Sloan Digital Sky Survey (SDSS) have been able to perform a large-scale study of such magnification, and their theories do gibe with the standard model. The team was able to measure the brightness of some 200,000 quasar sources and determine the precise magnification caused by gravitational lensing. The new calibration goes a long way toward deepening our understanding of lensing, which is a fundamental consequence of Einstein’s theory of General Relativity. The answers emerged only when enough data had been collected to see the overall pattern.

“While many groups have reported detections of cosmic magnification in the past, their data sets were not large enough or precise enough to allow a definitive measurement, and the results were difficult to reconcile with standard cosmology,” added Brice Menard, a researcher at the Institute for Advanced Study in Princeton, NJ. 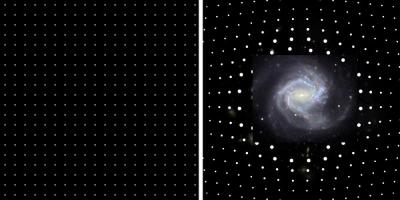 Image: The left panel shows a grid of points representing background quasars. The right panel is the same grid after being “gravitationally lensed” by the cluster of galaxies shown in the center of the panel (the magnitude of the effect is exaggerated to make it apparent to the eye). As predicted by Einstein’s Theory of General Relativity, the light from the background images is bent and distorted as it passes by the gravitational potential of the galaxies and dark matter in the cluster on its way to observers on Earth. The images nearest the foreground cluster have a larger area than their counterparts in the left panel, making them brighter. This effect is known as cosmic magnification. (Image credit: Joerg Colberg, Ryan Scranton, Robert Lupton, SDSS)

The Sloan Digital Sky Survey is mapping one-quarter of the entire sky in a bid to catalog the positions and absolute brightness of hundreds of millions of celestial objects. A major part of this effort is the measurement of the distances to more than a million galaxies and quasars. The breakthrough in the current work is the ability of Sloan researchers to extract quasars from the SDSS data. They did this by using statistical techniques that allowed them to find a quasar sample ten times larger than previous studies.

“With the quality data from the SDSS and our much better method of selecting quasars, we have put this problem to rest,” researcher Ryan Scranton said. “Our measurement is in agreement with the rest of what the universe is telling us and the nagging disagreement is resolved.”

Centauri Dreams note: One of the targets for probes to the nearby interstellar medium is the gravitational lensing point some 550 AU from the Sun. A space telescope placed there would be able to see an amplified image of objects (globular clusters, for example, or intriguing exoplanets) that are occulted by the Sun (as seen from the spacecraft). Interestingly, the light from such gravity-focused objects remains along the focal line at distances greater than 550 AU; in fact, the focal line extends to infinity.

For more on this, see Gregory Matloff, “Solar Sailing for Radio Astronomy and SETI: An Extrasolar Mission to 550 AU,” Journal of the British Interplanetary Society 47 (1994), pp. 476-484. Also see Claudio Maccone, “The Quasat Satellite and its SETI Applications,” in G. Marx, ed., Bioastronomy: The Next Steps (Norwell, MA: Kluwer Academic Publishers, 1988). Quasat is a design for an inflatable radio telescope originally proposed by Alenia Spazio (Turin, Italy) in the late 1980’s; Maccone led the investigation into deep space applications for the spacecraft.