Is biology as much a driver for interstellar travel as technology? Hungarian engineer Csaba Kecskes argues that it may be so; indeed, biology may hold the answer to Enrico Fermi’s famous ‘where are they?’ question about extraterrestrials. While most scenarios for the growth of technological civilizations assume a ‘galactic empire’ model — colonization modeled after 16th Century explorers, or the spread of Polynesian cultures through the islands of the Pacific — Kecskes uses a different analogy: the migration of life from water to land. As he writes in a 2002 paper in Acta Astronautica:

Using this analogy, the [Fermi] paradox simply disappears; fishes never meet lizards or rats. (In the Earth’s biosphere there are large groups of animals which live in a mixed water/land environment, but every analogy has its limits. Man’s adaptation to the space environment, especially to weightlessness, probably will create a very effective and final barrier).

In other words, technical civilizations may eventually lose interest in planets as they undergo biological adaptation to space-based environments. Here, then, is a possible growth path for an interstellar civilization, listed in order of development: 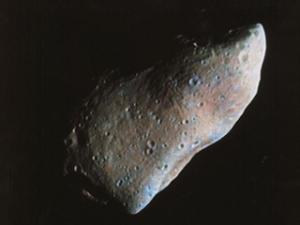 It’s a fascinating paper, worth digging up if you have a nearby engineering library (or access to the right online databases). Kecskes surveys the possible scenarios leading to a level 2 asteroid-based culture, from the ‘escapist’ scenario (oppressed minorities create a new homeland in space) to the ‘power show’ scenario, a kind of updated race to the Moon based on competing superpowers. The author thinks the latter, backed by massive government support, is the most likely outcome, and that the development of space manufacturing technologies will follow as a consequence of this colonization. A genuine asteroid-based society will develop industrial capabilities that should provide the first wave of growth into the interstellar medium.

Image: Asteroid 951 Gaspra, photographed on October 29, 1991 by the Galileo spacecraft. Could asteroids like this become the home of a future technological civilization? Credit: NASA.

Centauri Dreams‘ take: the Fermi paradox still seems robust at this end. Biologically adapted or not, space-based civilizations will surely have enough curiosity to want to examine the planets they encounter in their travels. They may not be empire-builders, but they will remain explorers. On the other hand, detecting traces of such advanced cultures may be more difficult than we suppose. I am reminded of Michio Kaku’s caution that the chances of a civilization like ours detecting a Type III Kardashev civilization (one capable of using the resources of an entire galaxy) would be like a stream of ants encountering an interstate highway and understanding it to be an artifact.

Kecskes’ paper is “Scenarios Which May Lead to the Rise of an Asteroid-Based Technical Civilization,” in Acta Astronautica Vol. 50, No. 9, pp. 569-577 (2002). This follows the earlier paper “The Possibility of Finding Traces of Extraterrestrial Intelligence on Asteroids” that the author wrote for the Journal of the British Interplanetary Society in 1998 (Vol. 51, p. 175).