How to Observe a Wormhole

If wormholes exist, is it possible to observe one? A fascinating, decade-old paper argues for the possibility, based on the observed phenomenon of mass curving space, which shows up in numerous instances of gravitational lensing. Just as the image of a background object like a distant galaxy can be bent by an intervening mass to produce a magnified image, so wormholes might be detected through their visual effects.

But wormholes, remember, are odd beasts. They should display negative mass. The upshot: instead of focusing light like a gravitational lens, a wormhole should diffuse it in all directions. 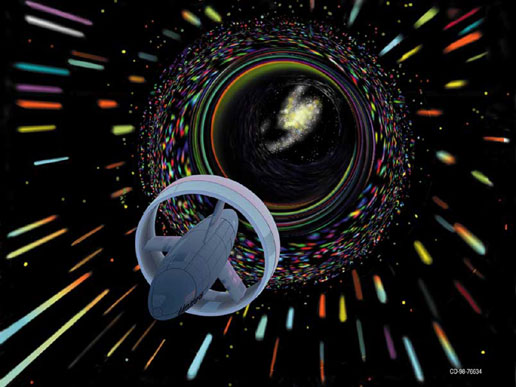 I discussed the possibilities with Geoffrey Landis at Glenn Research Center a couple of years ago. Landis, who worked on the paper “Natural Wormholes as Gravitational Lenses” (Physical Review D, March 15, 1995: pp. 3124–27) with a remarkable team (John Cramer, Robert Forward, Gregory Benford et al.) pointed out that an actual wormhole would not be visible. But if a wormhole passed in front of an intervening star, a halo of light would form. And as the wormhole moved to one side of the background object, a spike of light would result. So the signature is: a spike of light, a halo, then another spike. And it might be that somebody searching for gravitational lenses will turn up such a signature one day, if wormholes do exist.

Then again, most wormholes might have closed immediately after the Big Bang, leaving us to build our own. Stabilizing a wormhole mouth would require bizarre forms of matter possessing negative mass, which is just one of a series of problems making wormhole production unlikely. In an interview in Universe Today, physicist Dr. Stephen Hsu of the University of Oregon discusses his recent work on the constraints the universe puts upon matter.

To get the very weird exotic matter that I mentioned before with very negative pressure, it turns out the equations show that when you force the pressure to be that negative, there always some unstable mode in the matter, which means that if you were to bump your apparatus, you might find the exotic matter – which is stabilizing the wormhole – just collapses into a bunch of photos or something.

I would say it’s theoretically impossible to build classical matter which is stable and can stabilize a wormhole. You might ask, well maybe I’ll just avoid bumping the thing, but if you were to send a person through the wormhole, that itself would provide a bump and would very likely cause the whole thing to fall apart.

The key to this work is trying to determine whether the problem in creating wormholes is purely technological or the result of fundamental limitations of physics. That question is clearly worth investigating, though we won’t know the answer for some time. But Hsu’s studies so far lead him to believe that science fictional futures in which the human race stays close to the Sun are more realizable than the Star Trek vision of easy interstellar travel. Better to work, perhaps, on bioengineering, or artificial intelligence than starflight.

Centauri Dreams leans to a third alternative: interstellar flight does not violate the laws of physics, but it will be long, slow and rare. In the probable absence of wormholes, the earliest flights will be accomplished by beamed propulsion using lasers or particle beams, or perhaps engines drive by some form of antimatter-initiated fusion. If we do get to the stage of manned starflight, it will involve not vehicles the size of ocean liners with hundreds of crew members, but small teams spending decades in cramped vehicles on one-way colonizing missions. That’s not a Star Trek scenario, but a human future in the stars looks feasible whether or not we ever find wormholes.

For more, see Roman Buniy and Stephen Hsu, “Semi-classical wormholes and time machines are unstable,” an abstract of which is available here. BBC News also did a recent story on Hsu’s work.