Recent Water on the Martian Surface?

It’s hard to imagine water lasting for long on today’s Martian surface. But a team at NASA’s Ames Research Center has been studying gully sites that seem to indicate water outflows from what could be a subsurface aquifer. Indeed, the team’s computer simulations show that if liquid water did emerge from underground, it could create gullies about 500 meters long. “Our model indicates that these fluvially-carved gullies were formed in the low temperature and low pressure conditions of present-day Mars by the action of relatively pure liquid water,” said Jennifer Heldmann, principal author of the Ames study. 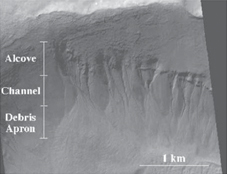 Take a look at the photograph, which shows the channel and debris apron of recent Martian gullies. The scale of the bar in the photo is 1 kilometer. If we are looking at the work of recent surface water, then it surely existed in a challenging environment. Given the temperature and air pressure at the surface, exposed Martian water should either boil or freeze almost immediately. But the way the gullies taper into small debris fields does suggest rapidly rushing water that froze or evaporated.

“In the Martian case, fluid well above the boiling point (which is a very low temperature at Mars’ low atmospheric pressure and air temperature) is suddenly exposed to the atmosphere,” said Heldmann. “The difference between the vapor and ambient pressures relative to the ambient pressure is large, and flash boiling can occur, leading to a violent loss of fluid.”

The Ames team will present its findings at the American Astronomical Society’s Division for Planetary Sciences annual meeting in Cambridge (UK) in early September. The study uses data from the Mars Orbiter Camera and other instrumentation aboard the Mars Global Surveyor spacecraft. But it also relies on studies of cold water saline springs in the Canadian high arctic, a polar desert that provides an analog to the Martian environment. Other analogs of Martian gullies have been studied in Iceland, with results pointing to water as the cause.

Centauri Dreams‘ take: A subsurface aquifer in the regions studied on Mars surely provides a prime landing site for future life-finding missions. But other explanations for gully formation are still in the running, ranging from calcium chloride brines to seasonal carbon dioxide outbursts and even snow melt. A thorough look at the alternatives is available on this page at the Planetary Science Research Discoveries site. An earlier article by Heldmann and colleagues is “Observations of martian gullies and constraints on potential formation mechanisms,” Icarus 168, No. 2 (2004), pp. 285-304.