Gamma rays force astronomers to work fast. Most bursts are sudden events, lasting only about ten seconds, which is why alerts are sent out whenever NASA’s Swift satellite detects one. But while the bursts are brief (and don’t even penetrate the atmosphere), the afterglow of these mammoth explosions can linger long enough to be observed by instruments on the ground. Which is what UNC-Chapel Hill astronomer Daniel Reichart immediately set out to do. 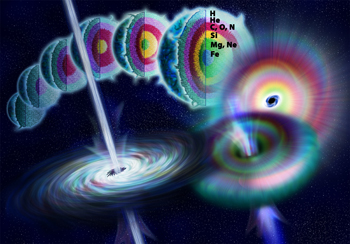 As telescopes around the globe locked onto the afterglow, Reichart’s team was able to measure the explosion’s distance using an array of six automated telescopes in Chile called the Panchromatic Robotic Optical Monitoring and Polarimetry Telescopes (PROMPT). The PROMPT array is just entering service, and Reichart’s initial work showed that the burst’s aftereffects were not visible. That was actually good news — it meant either that the object was enveloped in dust or that its light was shifted well into the infrared because of a high redshift.

Image (above): Stars shine by burning hydrogen. The process is called nuclear fusion. Hydrogen burning produces helium “ash.” As the star runs out of hydrogen (and nears the end of its life), it begins burning helium. The ashes of helium burning, such as carbon and oxygen, also get burned. The end result of this fusion is iron. Iron cannot be used for nuclear fuel. Without fuel, the star no longer has the energy to support its weight. The core collapses. If the star is massive enough, the core will collapse into a black hole. The black hole quickly forms jets; and shock waves reverberating through the star ultimately blow apart the outer shells. Gamma-ray bursts are the beacons of star death and black hole birth. Credit: Nicolle Rager Fuller/NSF.

“This is when we got really excited, because this is exactly the sort of signature that you are hoping to see if you are looking for very distant objects,” Reichart said. The dust interpretation was quickly rejected as new observations came in from PROMPT and the Southern Observatory for Astrophysical Research (SOAR) telescope on Cerro Pachón in Chile. Both photometric and spectroscopic observations confirmed the high redshift. Another unusual thing about GRB 050904 — it lasted over 200 seconds, twenty times the usual length of such a burst.

Unusually, Reichart relied on several undergraduate students in making the detection; a UNC junior, Josh Haislip, will be first author on the upcoming research paper. From a National Optical Astronomy Observatory news release:

“SOAR is a new telescope that is still in the advanced commissioning phase. The instrument that we used, OSIRIS, was just put on the telescope and made available for science observations a few weeks before this event,” Reichart said. “In fact, I had asked Josh to do some extra research on the instrument to be prepared just in case, since my more senior students were away at a gamma-ray burst workshop! He and the other students on the team did an excellent job, and are now well-prepared to work on future bursts with SOAR and PROMPT.”

The explosion was the object of intense study worldwide, from Japan’s Subaru Observatory in Hawaii to the European Southern Observatory’s Very Large Telescope. An interesting note on the explosion’s luminosity comes from this ESO press release: “…it is among the intrinsically brightest Gamma-Ray Bursts ever observed,” said Guido Chincarini from INAF-Osservatorio Astronomico di Brera and University of Milano-Bicocca (Italy) and leader of a team that studied the object with ESO’s Very Large Telescope. “Its luminosity is such that within a few minutes it must have released 300 times more energy than the Sun will release during its entire life of 10,000 million years.”