One way to explore a planetary surface is by rover, much as we are doing now on Mars with Spirit and Opportunity. The amount of data we’ve received from these missions has been nothing short of sensational, but as we look to the future, a key problem looms: rovers can sample only small areas of the surface. They’re a precious commodity that has to be targeted to high-value destinations, meaning they’re not adaptable to broad, general surveys. 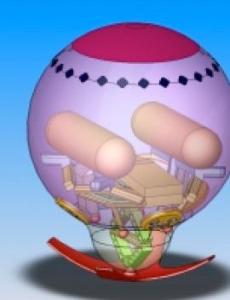 But a new robotic approach may come to the rescue, and it’s one that has just received Phase II funding from NASA’s Institute for Advanced Concepts. Under the supervision of principal investigator Steven Dubowsky (Massachusetts Institute of Technology), the work focuses on ‘microbots’ to enable large-scale explorations. Microbots are spherical robots that could be dropped by the thousands, perhaps through air-bags deployed from orbiter spacecraft. They would be able to hop, bounce and roll their way to sites in the most rugged terrain, equipped with miniature imagers, spectrometers and a variety of sampling devices. Collectively, such microbots would pool their information to analyze vast areas of a planetary surface.

Image: Design of a microbot. Dubowsky’s team thinks these tiny explorers would be about 10 centimeters in diameter and weigh 100 grams or less. Credit: Steven Dubowsky, MIT.

And microbots might be useful for targets below the surface as well, reaching deep underground by means of lava tubes, ice caves and boreholes. From a recent paper discussing the concept as part of an earlier NIAC study:

These targets are valuable since natural caves and other subsurface voids can provide a radically different set of conditions than the overlying surface. Such areas can serve as a repository for trapped materials from a planet’s past, and can yield materials that may shed light on past climate history and past solar activity. They can also provide a suite of environments for an enormous diversity of extremophile organisms, and have been suggested as the last refuge of life on planets like Mars where surface conditions have become significantly less hospitable to life over geological time.

Microbots turn out to be surprisingly mobile, using lightweight polymer materials to create actuators that allow a kind of directional hopping motion. After one cycle of bouncing and rolling, the microbot will return to a base posture, a method that has been demonstrated by working prototype. Powering the tiny robots would be micro fuel cells that create a high energy to weight ratio, allowing long distance travel over rough terrain. Current studies show that a microbot could leap 1.5 meters high and 1 meter horizontally under conditions like those on the surface of Mars, thus clearing boulders that might otherwise impede forward motion.

A variety of strategies for landing and deploying such microbots are examined in Dubowsky, Iagnemma, Liberatore et al., “A Concept Mission: Microbots for Large-Scale Planetary Surface and Subsurface Exploration.” This is the report on Dubowsky’s Phase I work on the concept, which will now receive a more detailed investigation in the Phase II study that runs from September 1, 2005 to August 31, 2007. All NIAC’s funded studies are available at its Web site.