A Multi-Tiered Approach to Planetary Exploration

As we saw in yesterday’s post on microbots, one of the problems of robotic exploration is that we put our equipment into relatively smooth terrain. That makes sense, given the time and cost of getting rovers to Mars, for example; what a shame it would be to see a priceless instrument package slam into a mountainside as it touches down. But rugged terrains, those places where water and volcanic activity have changed a landscape, may tell us much about a planet’s history and the possible existence of life on it.

Now a team of scientists is proposing a fundamental change to our existing paradigm of robotic exploration. In addition to orbiters, the team (scientists from the California Institute of Technology, the University of Arizona, and the U.S. Geological Survey) has focused on airborne instrument packages (think ‘blimps’), complemented by the kind of small, robotic explorers that could work their way into even the most hostile landscapes.

“We’re not trying to take anything away from the successful landings on Mars, Venus, and Titan, nor the orbital-based successes to most of the planetary bodies of the solar system,” says Wolfgang Fink, a physicist who is serving a multiyear appointment as a visiting associate at Caltech. “But we think our tier-scalable mission concept will afford greater opportunity and freedom to identify and home in on geological and potential astrobiological ‘sweet spots.'”

Note a key part of this strategy: a unified communications structure that integrates air and space assets with ground robots. It becomes more and more clear how vital the Interplanetary Internet Project is, an ambitious attempt to provide a communications backbone for the Solar System. Such an infrastructure could maximize information return by networking spacecraft through a set of protocols specifically designed for deep space exploration. 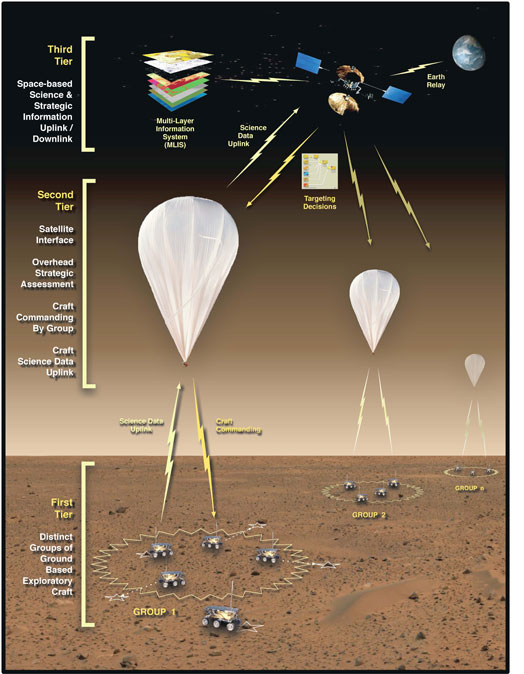 What could we learn from applying such tools to a new suite of robot explorers? Consider Mars, where, despite outstanding work by orbiting spacecraft, we still don’t know whether the mountains we’re seeing contain anything other than volcanic rock, or whether what looks like hydrothermal activity in the Martian past can be proven just that. The multi-tiered strategy is an ambitious way to solve these problems, as witness this comment by James Dohm, a planetary geologist in the Department of Hydrology and Water Resources at the University of Arizona:

“Ideally, you’d want to look at remote-based geological information while you walked with a rock hammer in hand along the margin that separates a lava flow from putative marine deposits, exploring possible water seeps and moisture embankments within the expansive canyon system of Valles Marineris that would extend from Los Angeles to New York, characterizing the sites of potential ancient and present hydrothermal activity, climbing over the ancient mountain ranges, gathering diverse rock types for lab analysis, and so on.

“We think we’ve devised a way to perform the geologic approach on other planets in more or less the way geologists do here on Earth.”

If Dohm is right, planetary exploration would become more flexible and more focused, identifying targets of scientific interest and migrating resources in their direction, a game plan that grows and shifts as further information is gathered. Stationary sensors could transmit details about targets of interest, while small and relatively expendable rovers would take on rocky and steep terrain to explore them. Airships would be particularly useful in environments like Titan, where autonomous systems would come into their own due to the long time lag with Earth.

Centauri Dreams‘ take: Clearly, as we move further out into the Solar System and beyond, concentrating all our instrumentation into a single package for exploration on a planetary surface makes less and less sense. That places the burden on autonomous systems to respond and adapt to a wide range of environments. Flexible, responsive machines are thus a critical element in the networking of the planets; they point toward the kind of systems that will be necessary for our first interstellar missions as we push into the Kuiper Belt.

A paper covering this work, “Next-generation robotic planetary reconnaissance missions: A paradigm shift,” will appear in an upcoming issue of Planetary and Space Science. A Caltech news release is available online.