Hubble’s recent findings about ‘Einstein rings’ remind us of the value of using gravitational lensing to observe distant objects. When light from a distant galaxy is bent by an intervening galaxy, the effect can be to create multiple separate images of the more distant source. But line up the two galaxies exactly and the gravitational bending causes the intriguing phenomenon called an Einstein ring, which is something like the pattern of a bull’s eye around the foreground galaxy.

Einstein rings are useful objects to astronomers, as witness this news release from the Harvard-Smithsonian Center for Astrophysics:

“An Einstein ring is one of the most dramatic demonstrations of the general theory of relativity in the cosmos,” said Adam Bolton of the Harvard-Smithsonian Center for Astrophysics (CfA). “It provides an unique opportunity to study the most massive galaxies in the universe.”

Interesting, too, from a mission point of view, for as Centauri Dreams continues to opine, a mission to the Sun’s gravity focus some 550 AU out would be a logical first step as we push into targeted interstellar missions. Such a mission, usually discussed under the FOCAL designation championed by Italian physicist Claudio Maccone, would provide unparalleled opportunities for astronomical observation and SETI research, and the chance to develop and fine-tune technologies ranging from solar sail to nuclear-electric propulsion. 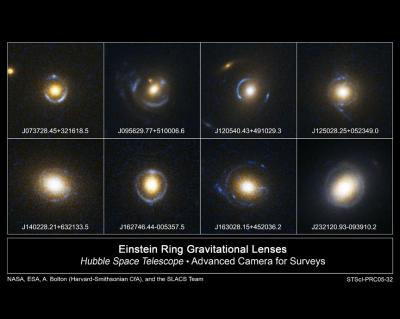 Image: The thin blue bull’s-eye patterns in these six Hubble Space Telescope images are so-called “Einstein rings,” which are the most elegant manifestation of gravitational lensing. The yellowish-red blobs are giant elliptical galaxies roughly 2 to 4 billion light-years away. Einstein rings are created as the light from galaxies twice as far away is distorted into circular shapes by the gravity of the intervening giant elliptical galaxies. Gravitational lensing allows astronomers to study the distribution of unseen matter in the lensing galaxies, and to observe light from more distant galaxies that would otherwise remain undetectably faint. Credit: NASA / ESA / A. Bolton (CfA) / and the SLACS Team

But back to Hubble, and the combination of its assets with those of the Sloan Digital Sky Survey (SDSS). Astronomers have used data from the two to identify 19 new gravitational lens galaxies, bringing the known number of such lenses well above 100. Of the 19, eight involve Einstein rings. All this is part of the Sloan Lens ACS Survey, which draws its candidate objects from SDSS and then uses Hubble’s Advanced Camera for Surveys for closer scrutiny.

An Einstein ring can help astronomers estimate the mass of the intervening galaxies and can also be a source of good information about the distribution of dark matter in elliptical galaxies. This is potent stuff: dark matter seems to make up the bulk of the total mass of the universe, and plays a huge role in the formation of the familar galactic shapes we know from visible light photographs. From the release, quoting Leon Koopmans of the Kapteyn Astronomical Institute in the Netherlands:

“Being able to study these and other gravitational lenses as far back in time as several billions years allows us to directly see whether the distribution of dark and visible mass changes with cosmic time,” said Koopmans. “With this information, we can test the commonly held idea that galaxies form from collision and mergers of smaller galaxies.”

Initial survey findings are to appear in early 2006 in The Astrophysical Journal. You can see a preprint of the paper “The Sloan Lens ACS Survey. I. A Large Spectroscopically Selected Sample of Massive Early-Type Lens Galaxies” here.