A Detailed Look at Sirius B

One of the important projects keeping astronomers busy as we wait for the next generation of both ground and space-based telescopes is mapping the local neighborhood. There is much to be learned, for example, in a star like Sirius, one of the Sun’s closest neighbors at 8.6 light years. Since 1862, we’ve known that Sirius is orbited by a white-dwarf star, and that this burnt-out remnant of an earlier star is terrifically difficult to study because of the glare of Sirius itself. Sirius B is about ten thousand times dimmer than Sirius.

Now Hubble has changed that picture, with an international team of astronomers having isolated the light of the white dwarf. This allows them to deduce its mass by examining how its gravitational field alters the wavelength of the light it emits. 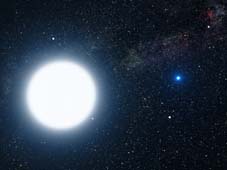 Image: An artist’s impression showing how the binary star system of Sirius A and its diminutive blue companion, Sirius B, might appear to an interstellar visitor. The large, bluish-white star Sirius A dominates the scene, while Sirius B is the small but very hot and blue white-dwarf star on the right. The two stars revolve around each other every 50 years. Credit: NASA, ESA and G. Bacon (STScI)

Martin Barstow (University of Leicester, UK), a leader of the observing team, has this to say about why the Sirius B work is significant:

“Accurately determining the masses of white dwarfs is fundamentally important to understanding stellar evolution. Our Sun will eventually become a white dwarf. White dwarfs are also the source of Type Ia supernova explosions that are used to measure cosmological distances and the expansion rate of the universe. Measurements based on Type Ia supernovae are fundamental to understanding ‘dark energy,’ a dominant repulsive force stretching the universe apart. Also, the method used to determine the white dwarf’s mass relies on one of the key predictions of Einstein’s theory of General Relativity; that light loses energy when it attempts to escape the gravity of a compact star.”

The work was reported in the October 2005 issue of the Monthly Notices of the Royal Astronomical Society. You can read a news release from the Particle Physics and Astronomy Research Council here.