More on Centauri B

The recent work on the oscillations of Centauri B, discussed in yesterday’s entry, had me thinking deep into the afternoon as I dodged holiday traffic en route to the grocery. What Tim Bedding (University of Sydney) and Hans Kjeldsen (Aarhus University, Denmark) had done by coordinating the efforts of two major observatories was to explore the inner workings of one of the nearest stars. But Centauri A and B are a close pair (they close to within about 10 AU, roughly Saturn’s distance to the Sun, at one point in their elliptical orbits, while at other times they are as distant as Pluto). Wouldn’t Centauri A’s light be a problem for a measurement as precise as this one?

The answer is no, as Dr. Bedding was kind enough to clarify in an e-mail. Here’s the gist of what he had to say:

Each spectrograph has an entrance slit which sits at the focus of the telescope. The slit is narrow (less than an arcsecond) and can be rotated to any angle, so we ensured that is was rotated so that the two components were perpendicular to the slit. Since A and B are separated by many arcseconds, there was no contamination. (Actually, a small amount of contamination would not matter too much because the two stars oscillate at very different periods). 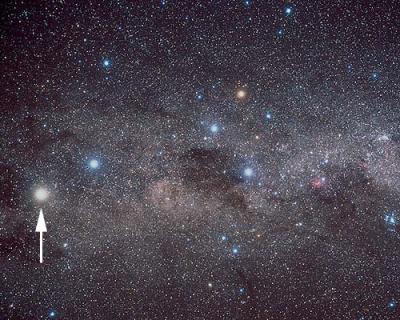 Thus we can separate the two stars, if needed, by noting the frequency of their oscillations. The precision of these measurements continues to amaze me. Clearly, we have it in our capability to learn a great deal more about this fascinating binary system, and about the third star — Proxima Centauri — that may or may not be gravitationally attached to it. Both Centauri A and B seem potential candidates for life-bearing planets, especially since stable orbits have now been determined in the habitable zones of each.

The above image of Alpha Centauri (marked with the arrow), Beta Centauri and the Southern Cross seems a fitting one as we move into the holidays. Stepping back from the purely scientific aspects of their study, the Alpha Centauri stars hold rich symbolic meaning as the closest known targets for interstellar exploration. In that sense, they continue to captivate those who dream of a human future in the cosmos. They are natural destinations for our first probes and, perhaps one day, our colonies.