Closing the Distance to the Perseus Arm

When it comes to making precise observations, nothing can beat the VLBA. Short for Very Long Baseline Array, this system of ten radio antennae is dispersed over the Earth’s surface from Mauna Kea (Hawaii) to St. Croix (Virgin Islands), using 25-meter dishes to create an interferometer 5000 miles wide. The array is controlled from an operations center in Socorro, New Mexico.

All those dishes make for remarkably sharp resolution, the best of any telescope in existence. And they’re needed to make the kind of observations recently performed by a team of astronomers studying the Perseus arm of the Milky Way. The nearest spiral arm to the Sun, the Perseus arm has now been shown to be much closer than previously thought, some 6400 light years as opposed to an earlier estimate of 14,000. The image below shows the location of the Sun and W3OH, a newly formed star in the Perseus arm in the region under study. 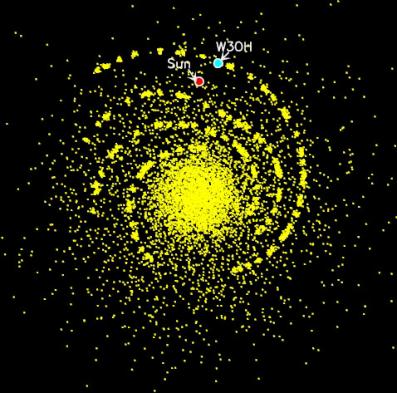 Image: Mark Reid and his colleagues measured the distance to the Perseus spiral arm and found it to be closer than believed, only 6400 light-years away. Credit Y. Xu et al.

It was the study of stellar motions that created the 14,000 light year estimate, but it had already been challenged by studies of massive young stars whose intrinsic brightness (as compared to apparent brightness as seen from Earth) seemed to argue for a shorter distance. But ponder, as Centauri Dreams often does, just how tricky any sort of measurement of galactic distance must be. We’re situated within the disk, looking not only through a veil of surrounding stars but also faced with impenetrable dust clouds that obscure our view in particular directions. It’s no surprise that we need to re-draw the galactic map on occasion, and this won’t be the last time.

The VLBA work relied on parallax, observing the change in position of a star relative to a far more distant, essentially fixed object like a quasar. The movement of the Earth around the Sun provides the opportunity to gauge this change. In this case, the team worked with radiation from compact radio sources called masers, which amplify radio-wave emissions. The effects are minute, to say the least; Mark Reid (Harvard-Smithsonian Center for Astrophysics), says he spent more than a decade developing the calibration techniques needed to make the new findings.

Get this: the accuracy we’re talking about is 10 micro-arcseconds, which is a factor of 100 better than previous methods. That resolution is equivalent to looking from the Earth at an astronaut standing on the Moon and being able to tell in which hand that person is holding a flashlight!