With the New Horizons mission to Pluto set to launch on January 17, the eyes of interstellar mission advocates turn to something seemingly mundane: the size, makeup and distribution of dust particles in the outer Solar System. In an ideal universe, each mission pushes and extends our knowledge, and if we are to build true star-faring probes one day, we’ll need to do a great deal of incremental, almost prosaic study along the way. Such as learning more about the medium through which fast spacecraft will have to fly. 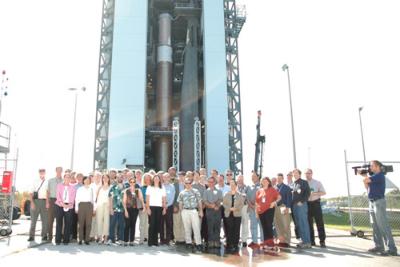 Image: The team and the rocket. The New Horizons researchers gathered in November at the Kennedy Space Center to see New Horizons and the Atlas V that will launch it. Credit: Johns Hopkins University Applied Physics Laboratory.

On that score, I see that the University of Colorado has contributed a space dust instrument that will fly on New Horizons. The first student-built instrument ever to fly on a planetary mission, the Student Dust Counter (SDC) will make observations of the density of dust particles as the 1000-pound spacecraft moves past Pluto and into the Kuiper Belt. Usefully, such measurements will tell us more about the formation of the Solar System, as well as identifying how dust particles are affected by the gravity of the outer planets.

We know little about the concentration of particles in the outer Solar System. The Pioneer spacecraft returned good data out to about 18 AU. Voyager 2 provided more as it approached Uranus and later Neptune, but its readings were made by measuring the impact of dust on the spacecraft with its plasma wave instrument. And the problem with that is that this instrument was designed to measure charged particles inside the magnetic field of gas giant planets; its dust measurements were readings of the plasma created by vaporized particles striking the skin of the spacecraft. The New Horizons SDC instrument, dedicated specifically to dust observations, should provide far more detailed data.

Closer to home, Cassini has been making observations of dust in Saturn space with its Cosmic Dust Analyzer, while we’re also gathering useful information from the Stardust mission, soon scheduled to return cometary material from the tail of comet Wild 2 to Earth. More than ten missions, either proposed, completed or now in progress, have been involved in filling the gaps in our knowledge of space-borne dust, so the picture is gaining definition. What New Horizons may be able to tell us is how dust concentrations in the Kuiper Belt vary from those closer to the Sun, and how they vary within the Belt itself.

One day we’ll be needing the same kind of measurements beyond the heliopause as our spacecraft move entirely out of the Sun’s influence into true interstellar space. Although Voyager 1 may well have reached the ‘termination shock’ at the edge of the heliosphere, it will take missions dedicated to exploring the interaction of the heliosphere with the interstellar medium to understand the astrophysical processes occurring between the stars. All that will be valuable background to the consideration of fast probes into the region of the Oort Cloud and beyond.

For an interesting take on dust problems with an interstellar craft moving at .12 c, take a look at A.R. Martin’s “Bombardment by Interstellar Material and Its Effects on the Vehicle,” Project Daedalus Final Report (Journal of the British Interplanetary Society, 1978): S116–S121.

And this other bit of Pluto news: Max Mutchler of the Space Telescope Science Institute (STScI) will discuss the discovery of Pluto’s ‘new’ satellites in a live Webcast on January 3. Click here for more information.