If you go back 35 years, what we now call ‘dark matter’ was even more controversial than it is today. What was the stuff, if it really existed, and should we consider it a dim version of what we see around us elsewhere in the galaxy? Or was it something truly exotic, not yet explicable but traceable in the effects it had on galactic evolution? Whatever it was, we seemed to need it to explain a key observation: stars in the outer regions of the galaxy move faster than they ought to based on the observed mass of stars in the Milky Way.

Today we still don’t know what dark matter is, but an intriguing new study again reminds us of its extensive influence. As reported at the ongoing meeting of the American Astronomical Society, the Magellanic Clouds — a pair of galaxies that orbit the Milky Way — seem to be interacting with the galaxy’s dark matter, creating a previously observed warp in the galactic disk. Using a new map of hydrogen gas emissions, researchers have found that the motion of the clouds through the dark matter can explain the warping efffect (thanks to Centauri Dreams reader Myrhaf for the heads-up on this story).

“The model not only produces this warp in the Milky Way, but during the rotation cycle of the Magellanic Clouds around the galaxy, it looks like the Milky Way is flapping in the breeze,” said Leo Blitz, director of UC Berkeley’s Radio Astronomy Laboratory. 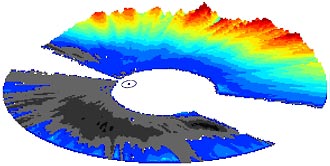 Moreover, the atomic gas layer in the galaxy is now seen to be vibrating like a drum in three different modes. The result: half of the galactic disk projects above the plane of stars and gas, while the other half dips below and then, farther from the center, back up again, as in the illustration. A UC Berkeley news release describes the motion as being reminiscent of “…the edges of a tablecloth flapping in the wind, since the center of the disk is pinned down.”

Image: An image, to scale, of the asymmetric, warped hydrogen layer of the Milky Way newly mapped by UC Berkeley astronomers. The colored contours are warped “up” with regard to the galactic plane, while the grey contours are warped “down.” The white area at the center is where most of the stars are, and the position of the sun is given by the dot with a circle around it. The sun orbits the center of the galaxy and is moving to the upper right in this view. The white areas, including the wedges, are difficult to study from Earth because of our position within the disk. Credit: Leo Blitz/Carl Heiles/Evan Levine-UC Berkeley.

Get this: Blitz and colleagues used a computer model that assumes the Milky Way’s dark matter is 20 times more massive than all visible matter in the galaxy combined. Set the Magellanic Clouds moving through this dark matter and their gravitational influence on the disk is magnified. The simulation explains how these satellite galaxies, which are not massive enough to create such warping on their own, may cause such highly visible effects. What it does not explain is the mind-boggling possibility — increasingly credible — that the visible universe is but a fraction of what is actually out there.