Toward a Self-Healing Spacecraft

Self-repair in spacecraft has always been a fascinating subject, one that comes to the fore as we launch missions to the outer Solar System. It’s one thing to send commands to fix a stuck tape recorder, as was done with Galileo on the approach to Jupiter in 1995. In that situation, controllers worked with a 40-minute time lag — eighty minutes for each confirmation that a command had been executed. But what happens if something goes awry in the Kuiper Belt, or the Oort Cloud, or a third of the way to Alpha Centauri?

Clearly, probes beyond our Solar System will have to rely heavily on advances in robotics and autonomous computing that allow them to diagnose and fix their own problems. But they’ll also have to make use of self-healing materials that can repair damage caused by temperature variations and external collisions. Small cracks caused by micrometeorites, for example, could weaken the spacecraft as they accumulate over the course of a long mission.

But how about healing such problems the way nature does? The European Space Agency has funded a new study that suggests that possibility. “When we cut ourselves we don’t have to glue ourselves back together, instead we have a self-healing mechanism. Our blood hardens to form a protective seal for new skin to form underneath,” says Dr Christopher Semprimoschnig, a materials scientist at ESA’s European Space Technology Research Centre (ESTEC) in the Netherlands, who oversaw the study. 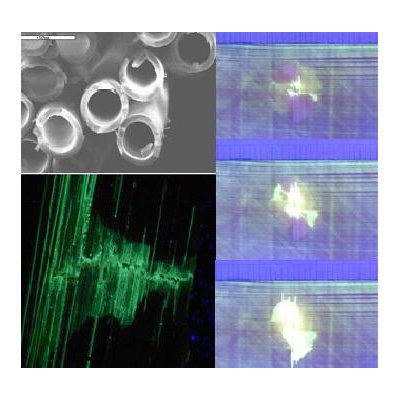 Semprimoschnig and company used a resinous composite material of the sort used in making spacecraft components. They replaced some of the fibers in the composite with new glass fibers containing adhesive materials. ESA uses the analogy of blood in the human body; when any of these glass fibers are broken, a liquid resin spills out and hardens, filling cracks and sealing the breach.

More information can be found at Self-Healing: Glass Fibre Reinforced Plastic, a page at the University of Bristol which also contains links to a PDF presentation on this work. ESA’s General Studies Programme is here.