About 440 million light years away in the direction of the constellation Aries is the source of a curious gamma ray burst. Curious because it lasted for nearly 2,000 seconds, while most gamma ray bursts last anywhere from milliseconds to tens of seconds. Moreover, the burst is dimmer than one would expect, which makes scientists believe we may be viewing the event off-axis, although there is no consensus on the matter as yet.

Is GRB 060218 a new kind of explosion, a precursor to a supernova? The blast was detected on February 18, and since then satellite and ground-based telescopes have been focused on the area. There has never been a gamma ray burst detected this close to Earth — in fact, this one is 25 times closer than the average. A team in Italy believes a supernova may be building here, while the European Southern Observatory’s Very Large Telescope has picked up the kind of optical brightening that also suggests the supernova solution. 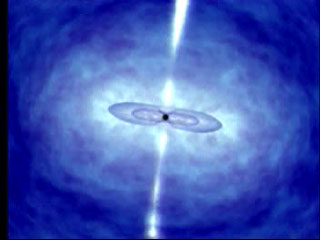 Image: The collapsing star scenario that is one of the leading contenders as the cause of gamma-ray bursts. Dr. Stan Woosley of the University of California at Santa Cruz proposed the collapsar theory in 1993. This artist’s concept of the collapsar model shows the center of a dying star collapsing minutes before the star implodes and emits a gamma-ray burst that is seen across the universe. Credit: NASA/Dana Berry.

“We expected to see the typical featureless spectrum of a gamma-ray burst afterglow, but instead we found a mixture between this and the more complex spectrum of a supernova similar to those generally observed weeks after the gamma-ray burst,” said Nicola Masetti of INAF’s Institute for Space Astrophysics and Cosmic Physics (IASF) in Bologna. “A supernova must be in the works.”

If so, this one is an observational gem. We may be looking at the collapse of a massive star, with stellar debris trapping optical light inside. GRB 060218 was detected by radio telescopes from the very day the Swift satellite first picked it up with all three of its instruments — the Burst Alert Telescope, the X-ray Observatory and the Ultraviolet/Optical Telescope. Scientists will thus be able to observe this explosion from start to finish in wavelengths ranging from radio through X-ray. And well-equipped amateurs with 16-inch telescopes may be able to see it as well as it reaches 16th magnitude brightness.

Next post: A New Mission to Find Terrestrial Planets