Are the Voyager spacecraft still doing good science? You bet, as witness the passage of Voyager 1 through the termination shock at the edge of interstellar space. Scientists had assumed the craft’s crossing of this boundary, where the solar wind abruptly slows, would confirm previous theories about anomalous, energetic cosmic rays that were thought to be produced in the region. But Voyager did anything but, finding the cosmic ray count to be far lower than predicted during its passage.

New work by David McComas (Southwest Research Institute) and Nathan Schwadron (Boston University), published recently in the Geophysical Research Letters, offers a theory why. They base their thinking on the shape of the shock itself, previously thought to be circular. The duo showed that a more realistic shape made sense. “In fact, the termination shock couldn’t be circular because the solar system is moving through the galaxy, which would create more of a flattened egg shape,” says Schwadron. “A flattening of the nose of the termination shock leads to a time dependant acceleration process.”

According to the new model, the nose of the acceleration shock (Voyager 1’s approximate location) is not where particles are best accelerated. Rather, they can only reach highest energies after moving along the sides, or flanks, of the shock, where the magnetic field has had longer connection times to accelerate particles. 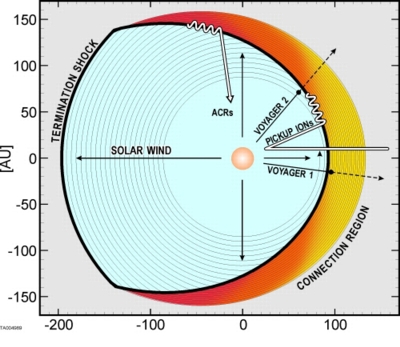 Two other spacecraft will tell us more. Voyager 2 should pass the termination shock farther back from the nose in about 2-3 years, and the new model offers predictions about the jump in energetic particle fluxes that should occur. And then there’s IBEX (Interstellar Boundary Explorer), whose mission (with launch in 2008) will offer images of the interactions around the termination shock. The paper is “An Explanation of the Voyager Paradox: Particle Acceleration at a Blunt Termination Shock,” in the Geophysical Research Letters Vol. 33, No. 4 (17 February 2006), with abstract available here.