A River of Stars

Centauri Dreams follows studies about dark matter with great interest, given the mysterious nature of the stuff and the fact that it apparently has so much to say about how galaxies form. One way to get a handle on dark matter is to study the positions and velocities of stars in the galaxies themselves, thus learning what forces must account for them and how unseen matter may be affecting where they travel.

A new study in this vein has now uncovered a ‘river’ of stars of considerable size that arcs over the disk of the Milky Way. “We were blown away by just how long this thing is,” says Carl Grillmair, an associate research scientist at the California Institute of Technology. “As one end of the stream clears the horizon this evening, the other will already be halfway up the sky.” 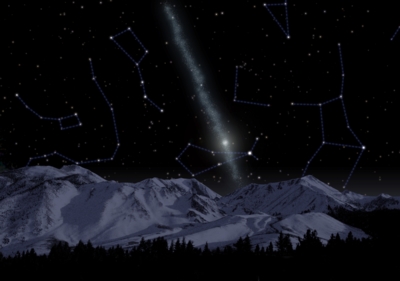 Image (click to enlarge): On an evening in early April, the new stream rises 45 degrees from the eastern horizon, passing just under the bowl of the Big Dipper. The North Star Polaris is at far left.” Credit: California Institute of Technology.

Grillmair, who is co-author of a paper on the stream that is about to appear in the Astrophysical Journal Letters, has good reason to be amazed. The star stream begins just south of the bowl of the Big Dipper and continues to a point about 12 degrees east of Arcturus in the constellation Bootes. It emerges from a cluster of some 50,000 stars known as NGC 5466; tidal forces appear to be stretching the cluster, which would otherwise be largely spherical, and the outlying stars are drifting into their own orbits, both ahead and behind the cluster.

To find the stream, Grillmair and graduate student Roberta Johnson studied the color and brightness of more than 9 million stars in the Sloan Digital Sky Survey public database. “The new stream may be even longer than we know, as we are limited at the southern end by the extent of the currently available data,” Grillmair adds. “Larger surveys in the future should be able to extend the known length of the stream substantially, possibly even right around the whole sky.”

But don’t expect to see the star river with the unaided eye. The stars that make it up are said to be about three million times fainter than the dimmest stars you can see on a clear night. What counts, though, is that astronomers may be able to use it as another clue that will help reveal how much dark matter the Milky Way contains, and whether that matter is distributed evenly or in clumps. Centauri Dreams would not be surprised to see more such formations emerge as we gain the tools to discern their presence through the intervening galactic disk.