More on the Hubble Constant

We’ve just looked at the interesting work of Kris Stanek and collaborators on the Hubble constant, which could be taken to imply that previous measurements of this important figure are off by about 15 percent. Stanek’s data point to a Hubble constant of 61 kilometers per second per megaparsec (a megaparsec is equal to 3.26 million light years); current estimates had begun to settle in comfortably at around 70 (km/s)/Mpc, although some astronomers, most conspicuously Allan Sandage, held out for a much lower figure.

Now comes news of a study working with x-ray data from the Chandra space observatory and radio observations of galaxy clusters. Using this information, Max Bonamente (MSFC) and team have made distance measurements to 38 galaxy clusters ranging from 1.4 billion to 9.3 billion light years from Earth. Their finding on the Hubble constant pegs it at 77 kilometers per second per megaparsec, with an uncertainty of about 15%. And it’s a finding more or less in agreement with recent work other than Stanek’s.

Bonamente and team used the Sunyaev-Zeldovich effect, the interactions between photons in the cosmic microwave background and electrons in hot dust found in the galaxy clusters under investigation. Here’s more on their method from a Chandra news release:

The photons acquire energy from this interaction, which distorts the signal from the microwave background in the direction of the clusters. The magnitude of this distortion depends on the density and temperature of the hot electrons and the physical size of the cluster. Using radio telescopes to measure the distortion of the microwave background and Chandra to measure the properties of the hot gas, the physical size of the cluster can be determined. From this physical size and a simple measurement of the angle subtended by the cluster, the rules of geometry can be used to derive its distance. The Hubble constant is determined by dividing previously measured cluster speeds by these newly derived distances. 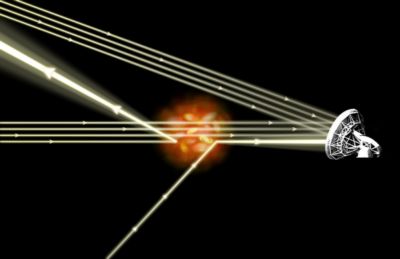 Image: The astronomers in this study used a phenomenon known as the Sunyaev-Zeldovich effect, where photons in the cosmic microwave background interact with electrons in the hot gas that pervades the enormous galaxy clusters. The photons acquire energy from this interaction, which distorts the signal from the microwave background in the direction of the clusters. This illustration depicts this concept graphically by the broad bright beams emanating from the cluster. Credit: NASA/CXC/M.Weiss.

Just how puzzling is the Hubble discrepancy? Enough that fully understanding how to calibrate our distance measurements is likely to be a continuing preoccupation for astronomers. In their own paper, Stanek and team refer to the lower Hubble constant finding as an ‘improbable result,’ and one that “…brings into question the Key Project metallicity corrections and reddening values not only for M33, but also for the other galaxies in the Key Project.” And the paper goes on to say, “We thus demonstrate the importance of accurately calibrating the distance scale and determining H0, which are both vital for constraining the dark energy equation of state and complementing the cosmic microwave background measurements from the Wilkinson Microwave Anisotropy Probe.”

Vital indeed, which is why extensive resources are now being applied to the task. The Key Project referred to above is an attempt to refine the Hubble constant to an accuracy of plus or minus 10 percent using observations of Cepheid variable stars. The paper describing the Bonamente work appears in the August 10 issue of The Astrophysical Journal. You can see the preprint of Bonamente, LaRoque, Carlstrom et al., “X-ray and Sunyaev-Zeldovich Effect Measurements of the Gas Mass Fraction in Galaxy Clusters” here.