A Dream of Ancient Starlight

There are images that need to be appreciated slowly, the way you sip a rare wine. They should be carried with you a while, pondered, mulled over, and sometimes, as happened to me last night, they slip into your dreams. That dream was powerful enough to push the image below into today’s entry. It’s a snapshot of 28 galaxies, all of them close to 13 billion years old, factories of star formation whose intense blue light has been red-shifted to the ancient hue we see today. All told, the astronomers doing this work have found more than 500 galaxies that existed less than a billion years after the Big Bang. 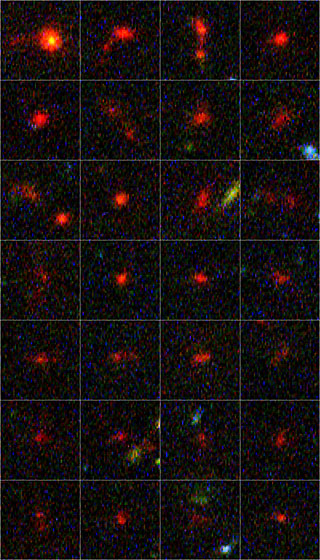 This vista follows up an earlier story in these pages describing work done by Rychard Bouwens (UC-Santa Cruz) and colleagues, who worked with the Hubble Ultra Deep Field and the Great Observatories Origins Deep Survey fields in their analysis of early galaxy formation. They believe these galaxies were producing stars at a rate ten times faster than we observe in nearby galaxies. That’s a pace that should have sufficed to reheat the cold hydrogen gas that would have existed between galaxies in the cooling that followed the Big Bang.

Image: The galaxies seen here are a sample of the most comprehensive compilation of galaxies in the early Universe. Credit: NASA, ESA, R. Bouwens and G. Illingworth (University of California, Santa Cruz, USA).

“Seeing all of these starburst galaxies provides evidence that there were enough galaxies 1 billion years after the Big Bang to finish reheating the universe,” said team member Garth Illingworth of the University of California, Santa Cruz. “It highlights a period of fundamental change in the universe, and we are seeing the galaxy population that brought about that change.”

Reheating early interstellar hydrogen would have produced, after a few hundred million years, a hot transparent plasma, a ‘brief’ transitional event that changed the fundamental character of the cosmos. But there are earlier galaxies to find, and the next step in the exploration of this distant era will be the Hubble upgrade known as the Wide Field Planetary Camera 3, an instrument sensitive enough to detect starlight so remote that it has been stretched into the infrared as the universe expands. The team will present more on this work in the November 20 issue of The Astrophysical Journal.