A Celestial Companion for 2007 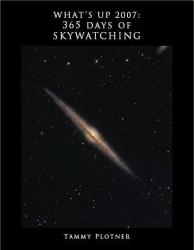 The last regular posting of 2006 is a good time to remind you that Tammy Plotner’s What’s Up 2007 is now available. It’s a 410 page PDF file that takes you through celestial events on a day to day basis for the entire year. Loaded with photographs and charts, What’s Up 2007 is free to download, or you can buy a printed version for $25. A third alternative is to check the Astronomy What’s Up weblog daily, where each day’s entry will be posted as the year progresses.

I skipped ahead at random and landed on February 14, which I learned from Plotner’s book is not only Valentine’s Day but also the birthday of astronomer Fritz Zwicky, who catalogued galaxy clusters and did yeoman work on supernovae. The celestial object for the day is the Spirograph Nebula, whose image (taken by the Hubble telescope) adorns the page.

Plotner’s clear prose walks us through the basics:

…the light you see tonight from the IC 408 planetary nebula left in the year 7 AD. Its central star, much like our own Sol, was in the ﬁnal stages of its life at that time, and but a few thousand years earlier was a red giant. As it shed its layers off into about a tenth of a light-year of space, only its superheated core remained—its ultraviolet radiation lighting up the expelled gas. Perhaps in several thousand years the nebula will have faded away, and in several billion years more the central star will have become a white dwarf — a fate that also awaits our own Sun.

My advice is to track daily celestial events through the weblog or else buy the printed copy, but then I have a notorious distaste for the PDF format. Whatever your choice, you’ll want to consult the tips and background information the book provides again and again. Around here, an ever present danger is to get so absorbed in astronomical theory that I forget to go outside and actually look up. What’s Up 2007 is a good antidote, a stimulating way to reconnect with the wonder of the night sky.