Watery Birth of a Stellar System

A Class 0 protostar is a star so young that the bulk of its light is emitted at long infrared wavelengths, blocked from Earth-based observatories by our atmosphere. It takes space-borne platforms like the Spitzer Space Telescope to make sense out of these objects, hundreds of which have now been identified, though few studied with the precision of the one designated IRAS 4B. There, signs abound of a region within the protostellar envelope that is warmer and denser than the material around it. 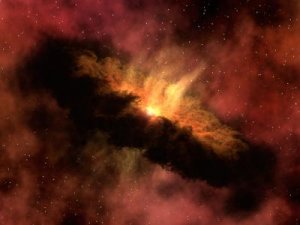 Located about a thousand light years from Earth in the nebula NGC 1333, the infant star presents an interesting signature to Spitzer’s infrared spectrograph. Out of thirty protostars examined by University of Rochester astronomers, IRAS 4B is the only one to show the infrared spectrum of water vapor, a fact understood to mean that material is falling from the protostar’s envelope onto the surrounding, denser disk. As the ice hits the protoplanetary disk, it heats rapidly and emits its characteristic infrared signature. We seem to be looking at the formative mechanism from which planetary systems later emerge.

At temperatures in the area of 170 degrees Kelvin (-102 C, or -153 F), the disk is currently an active place, says Dan Watson (University of Rochester):

“Icy material from the envelope is in free-fall, reaching supersonic speeds and crashing into the protoplanetary disk. The ice vaporizes on impact, and the warm water vapor emits a distinctive spectrum of infrared light. That light is what we measured. From the details of the measured spectrum we can tease out the physical details of this brand-new, pre-planetary disk.”

Enough water to fill Earth’s oceans five times forms what the astronomers are calling the ‘puddle’ on the disk’s surface, filling an area whose perimeter seems to extend out about 40 AU. An interesting implication of this work involves the icy bodies of our own outer Solar System, usually thought to carry ices descended directly from the interstellar medium. Not without an intervening step, says Watson:

“On Earth, water arrived in the form of icy asteroids and comets. Water also exists mostly as ice in the dense clouds that form stars. Now we’ve seen that water, falling as ice from a young star system’s envelope to its disk, actually vaporizes on arrival. This water vapor will later freeze again into asteroids and comets.”

The chemistry of the disk is essentially ‘reset’ by this process, making the uses of outer system ice in understanding interstellar conditions problematic. And note the interesting assumption that the reason only one of the 30 protostars under study showed signs of water is that the ‘watery’ phase of system formation is short-lived and therefore tricky to observe. As more and more protostars become available for study, that notion will surely be tested.