New Missions for Hubble and Spitzer

With all eyes on the mission to service the Hubble telescope, it’s fascinating to see that technology created for the James Webb Space Telescope is going to be used to enhanced Hubble’s Advanced Camera for Surveys (ACS). The particular Application-Specific Integrated Circuit, or ASIC, design in question mirrors that of the Webb instrument and also equipment recently installed at the 2.2-meter University of Hawaii telescope on Mauna Kea, where it is part of the Charge-Coupled Device (CCD) detection system. 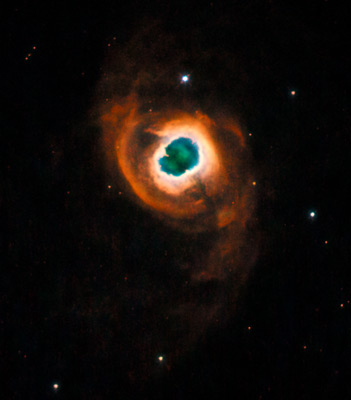 An ASIC is a small, specialized integrated circuit, and the one about to go into Hubble could be transformative. That’s because new spectrographic instruments going into Hubble will work with the repaired and upgraded ACS instrument in the study of dark energy and distant galaxies, a truly enhanced imaging capability for the aging workhorse. The ASIC next goes into space on the Webb telescope, leading one to ponder what a repair mission to that instrument would look like. After all, Hubble orbits 350 miles up, while the Webb instrument will work a million miles out.

Image: The planetary nebula K 4-55, a last image from the soon to be decommissioned Wide Field Planetary Camera 2 (WFPC2) onboard the Hubble Space Telescope. A planetary nebula contains the outer layers of a red giant star that were expelled into interstellar space when the star was in the late stages of its life. Ultraviolet radiation emitted from the remaining hot core of the star ionizes the ejected gas shells, causing them to glow. Credit: NASA, ESA, and the Hubble Heritage Team (STScI/AURA).

With the flurry of Hubble news, though, we shouldn’t forget that the remarkable Spitzer Space Telescope is also marking the end of an era as its liquid helium stores become exhausted. The so-called ‘warm’ mission that follows offers a new lease on life, says Spitzer project manager Robert Wilson (JPL):

“We like to think of Spitzer as being reborn. Spitzer led an amazing life, performing above and beyond its call of duty. Its primary mission might be over, but it will tackle new scientific pursuits, and more breakthroughs are sure to come.” 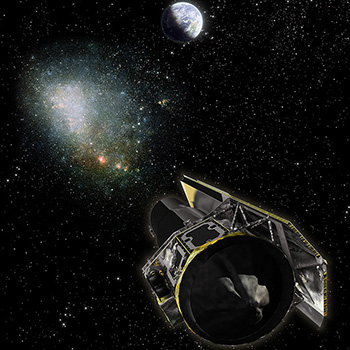 Spitzer’s liquid helium has kept its three instruments chilled to -271 Celsius, which is less than three degrees above absolute zero. The new, ‘warm’ Spitzer operates at -242 Celsius, frigid by any standards, but a large enough temperature rise to render two of its instruments incapable of detecting cool objects. But Spitzer’s two shortest wavelength detectors, mounted in its infrared array camera, should continue to function, and that means further looks at, among other things, planet-forming disks and gas giant planets around distant stars.

Image: The primary mission of NASA’s Spitzer Space Telescope is about to end after more than five and a half years of probing the cosmos with its keen infrared eye. Credit: JPL/Spitzer Science Center.

In other words, while we lose the multiband imaging photometer and infrared spectrograph, we still have the infrared array camera working with two infrared channels capable of doing good science. And doubtless we’ll be seeing more examples of the secondary-eclipse method that has allowed researchers to study temperatures and atmospheres on gas giant exoplanets. Spitzer will team up nicely with Kepler as new data come in. Another major task: The hunt for potentially hazardous asteroids. More on the new Spitzer mission in this Spitzer Science Center news release.

Addendum: Thanks to Jeremy Whatley for a clarification on the ASIC discussed above.