Herschel: Lighting Up the Interstellar Medium

Sometimes we’re reminded in a stunning way of how much material exists in the star-forming regions of the galaxy. Take a look at the image below, which comes from the Herschel Space Observatory. Herschel’s SPIRE camera, which works at wavelengths between 250 and 500 microns, is combined here with data from the observatory’s other camera, called PACS, which operates between 70 and 170 microns. The combination reveals detailed images in the far infrared, locating star-forming regions that would otherwise be difficult to detect at a single wavelength. 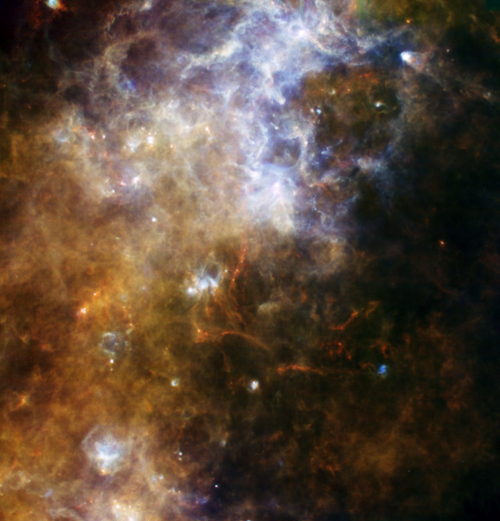 Image: Five-color composite image of a 2 x 2 degree area in the plane
of our Galaxy, combining the PACS and SPIRE observations. In this image the SPIRE and PACS images have been combined into a single composite; here the blue denotes 70 microns, the green 160 microns, and the red is the combination of the emission from all three SPIRE bands at 250/350/500 microns. Credit: ESA.

The infrared range these instruments cover should tell us much about interstellar material, including its mass, temperature and composition. What we learn about the interstellar medium is, obviously, a factor in the design of any future probes to the stars. Herschel, the largest telescope yet flown in space, is now undergoing performance verification, which involves tests of its data processing software and checks of its hardware’s operational modes until mid-October. The image above is part of the first trial run using both the SPIRE and PACS instruments at the same time.

And what a result. Here we’re looking at interstellar materials condensing in what this rather elegant Science & Technology Facilities Council news release calls “…a continuous and interconnected maze of filaments and strings of newly forming stars in all stages of development, unveiling a tireless Galaxy constantly forging new generations of stars. We see an intricate network of filamentary structures with surprising features indicative of a chain of near-simultaneous star-formation events, glittering rather like beads of water on a string in the sunlight.”