“RuBisCo Stars” and the Riddle of Life

We’ve looked before at the work of MIT biology research affiliate Joe Davis, whose passion is the melding of science and art. Among his many ideas are the creation of an ‘infogene,’ engineering a sign of human intelligence into the genome of bacteria that could be flung into the heavens by the trillion, and a three-masted Gulf Coast tower that would discharge laser beams into the sky. In 1986, Davis used MIT’s Millstone radar to beam a signal to Epsilon Eridani, Tau Ceti and two other stars. His most recent adventure takes him to the great telescope at Arecibo. It involves the 35th anniversary of the Drake/Sagan transmission to M13, a messaging strategy based on molecular biology, and the emergence of the coolest iPhone in the world.

What follows is a narrative describing events that took place just over one week ago:

I traveled from Boston to Puerto Rico on 03 November to deliver a lecture for the University of Puerto Rico’s Biology Colloquium (Rio Piedras campus) in San Juan. I also planned to meet with Arecibo Observatory interim Director, Dr. Michael C. Nolan to propose a project that would coincide with the 35th anniversary of the famous message for extraterrestrial intelligence that was transmitted into space from Arecibo by astronomers Frank Drake and Carl Sagan in 1974.

Poetic and philosophical implications underlying the scientific search for extraterrestrial intelligence (SETI) have marked much of my work and career as an artist. In the 1980s, technical problems associated with the use of radar and spacecraft as message-transmitters inspired me to develop prototype bacterial carriers of generic information that could survive for very long periods of time in the harsh environments of space. That is how a subject as vast in scope as the search for extraterrestrial intelligence ultimately brought me to the study of molecular biology. 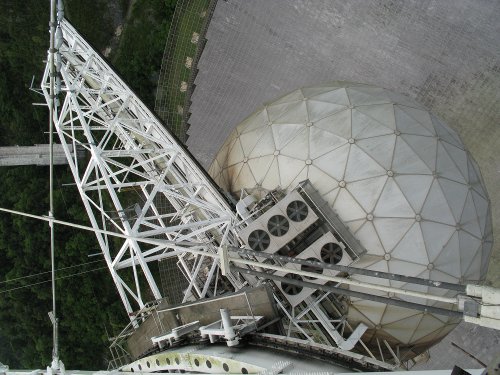 In 1974, molecular biology was entering its “golden age”. Part of the Sagan Drake message was encrypted with a rudimentary likeness of the DNA double helix. The hereditary role of DNA was then well known – as were two of the three principal conformations of its molecular structure – but the triplet operation of the genetic code had only recently been unraveled and modern techniques for DNA sequencing were still a few years away. The first genes (DNA) were sequenced in 1977 and the first recombinant organisms were produced in Herbert Boyer’s laboratory (UCSF) in 1978. In 1974, there was no genomic science at all. While messages were being transmitted to extraterrestrial intelligence no one knew that genetically speaking, human beings are 70% identical to tomatoes.

In 35 years since the Sagan-Drake transmission from Arecibo, radar antennae all over the world have more or less routinely searched the sky for unambiguous signals from advanced extraterrestrial civilizations. The SETI@Home project, organized by the Space Sciences laboratory at UC Berkeley has allowed millions of lay enthusiasts to participate in SETI sky surveys by donating processing time on home computers. Various amateur and commercially motivated transmissions have taken place, but such transmissions have been insufficiently powerful and arbitrarily or naively composed by groups and individuals from outside the formal, scientific community. No federal funds at all have been allocated for SETI searches and with the possible exception of Poetica Vaginal (ca. 1986), for almost 35 years, no serious scientific radio messages for extraterrestrial intelligence have been transmitted into space. 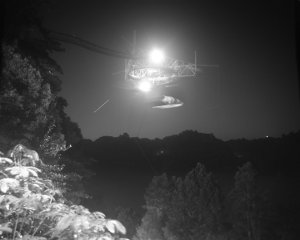 In late October of this year, I contacted members of the astronomy community at Cornell University for referrals to scientists and administrators at Arecibo Observatory (Cornell operates Arecibo Observatory under contract with the National Science Foundation). My objective at Arecibo was to carry out transmission of a new message to extraterrestrial intelligence on or around the 16 November anniversary of the 1974 Sagan-Drake transmission. To prepare for meetings at Arecibo Observatory, I organized recommendations and letters of support for the project from respected members of the international academic and research communities that were sent to Arecibo’s director on my behalf. Among these were recommendations from Dr. Irving Vega of University of Puerto Rico Biology and his Department Chair, Dr. Carmen Maldonado, art historian James Elkins, astronomer and editor, Dr. Roger Malina, CalPoly physics Prof. Peter Scwartz, University of Washington art historian, Marek Wieczorek, scientists from the biology community here in Massachusetts and abroad, members of the astronomy community at Cornell and others.

All living things are made of protein and the most abundant protein on Earth is called RuBisCo (ribulose- 1,5-bisphosphate carboxylase oxygenase). It is actually quite an interesting protein. To quote Wikipedia, it is “an enzyme that is used in the Calvin cycle to catalyze the first major step of carbon fixation, a process by which the atoms of atmospheric carbon dioxide are made available to organisms in the form of energy-rich molecules such as sucrose.” It is also interesting in that it actively selects against 13C, one of the naturally occurring stable isotopes of atmospheric carbon, in favor of 12C. The difference of course, is only a single neutron.

In a letter of support sent to Arecibo, Dr. Peter Weigele (staff scientist at New England Biolabs) wrote, “RuBisCo is not only the most abundant protein on earth, it is THE molecule, in all its many forms, that uses the energy supplied by photosynthesis to convert carbon dioxide into food. The choice of this molecule for broadcast communicates the central importance of our sun in sustaining life as well as an implicit understanding of the role of CO2 in our biogeochemical systems. This is a message that is both timely and timeless– for the Universe and here on Earth!”

The Gene for the large RuBisCo subunit is a 1434-mer DNA molecule:

I pointed out that certain technical shortcomings of the 1974 Sagan-Drake transmission could be avoided with a follow-up transmission. I also found candidate stars that would be located in the Arecibo “window” (above 20 degrees from the horizon) in the first weeks of November (gleaned from online sky maps and SETI Institute Jill Tarter’s and Margaret Trunbull’s list of candidate ‘nearby habitable stellar systems’). 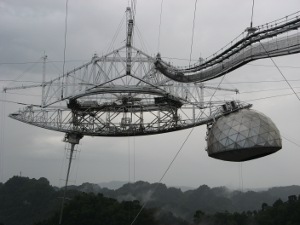 I established that aspects of the galactic rotation of target stars (which actually negated the Sagan-Drake effort) would be inconsequential when targeting stars located less than a few hundred light years away from the sun.

My friends at Cornell also suggested that since our best bet at finding ETI would be ones that are already quite sophisticated, targeting infrared sources in our galaxy that have no corresponding optical object should also be considered. Although I personally remain rather skeptical on this point, these objects could be Dyson Shells or other similar ETI astroengineering projects. The online data set of the IRAS could be used to identify such sources.

I proposed that a short message containing the RuBisCo sequence could be transmitted during some brief interval between scheduled ongoing use of Arecibo Radar or that it may coincide with periods set aside for checks and maintenance.

I was also advised incidentally, that no special ceremony or event was planned to mark the November 16 anniversary.

I arrived at Arecibo Observatory on Friday, 06 Nov. with several companions who had flown in to participate in the project. My companions included Jonathan, Pam and Rhode Island School of Design Prof. Emeritus, Al Wunderlich, film maker Peter Sasowsky, photographer and collaborator Ashley Clark and Belgian art historian, Danielle Hofmans.

Power outages caused by a lightning strike on Friday night postponed any use of Arecibo Radar until power transmission lines were repaired in time for the next night’s observations. I am now delighted to report that on Saturday night (07 Nov) we managed to send the RuBisCo gene sequence to three “nearby” stars:

The amazing thing is, we did it with my iPhone! 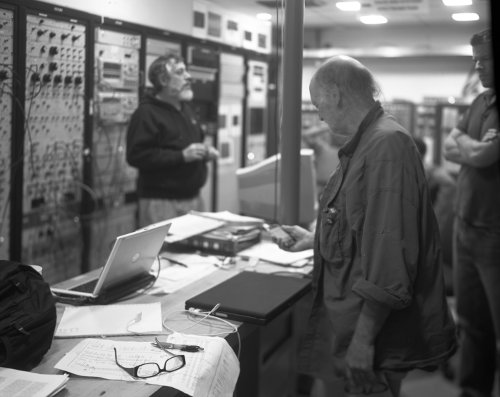 Arecibo’s “coder” (a device that interrupts the 2 Megawatt radar signal at precise intervals) was down. Use of that component would have been the most obvious way to input data that would be reflected in Arecibo Radar’s transmitted signal. Creative solutions were called for. Inspired in part by techniques I used 25 years ago to interface with Millstone Radar for the Poetica Vaginal transmission, we converted the 1434-mer RuBisCo sequence into an analog audio file that I recorded on my iPhone. Then, we actually interfaced my iPhone with Arecibo’s powerful radar and transmitted from approximately 11:30 p.m. until 12:45 a.m. (see attached pictures). The duration of each transmission was approximately 5 times longer than the 1974 Sagan-Drake transmission.

Now I have the coolest iPhone in the world.

How best to send out a gene as a coded signal? More on that tomorrow, along with a look at ways to add additional information to the original message.