The recent debate between Jean Schneider (Paris Observatory) and Ian Crawford (University of London) is the sort of dialogue I’d like to see more of in public forums. When I began researching Centauri Dreams (the book) back in 2002, I was deeply surprised by the sheer energy flowing into interstellar flight research. True, it lacked focus and tended to be done by researchers in their spare time, as opposed to being funded by universities or government agencies, but I had not realized that the topic itself was under such serious investigation by so many scientists.

All those fascinating concepts, from laser sails to fusion runways, were the catalyst for this site, where keeping an eye on the ongoing discussion is the order of the day. In an era of short-term thinking and instant gratification through one gadget or another, taking a longer look at the human enterprise and where it is going is an imperative. One way to do that is to consider whether our species has a future in deep space, and just what the shape of that future might be. Discussions like Schneider’s and Crawford’s look long-term, at what we might one day accomplish with our technologies, and whether or not interstellar missions really are feasible.

We can surely say this much: Nothing in physics rules out interstellar flight, even though to accomplish it in the relatively near-term would require extremely long mission times for robotic vehicles whose expense would dwarf their potential utility even if we had the patience to wait out their journey. Let’s hope that by continued research we can learn to do better, and that means taking existing concepts and reworking them in light of new technologies to see what the possibilities are. All of which is fascinating stuff, and necessary as foundation-building even if we are, as seems most likely, one or more centuries away from the launch of any such mission.

Measurements of the Medium

First steps need to be taken in any enterprise. On that score, I remind you of the interstellar dust issue that Jean Schneider first raised in his original story in Astrobiology. We’re worried about a fast-moving vehicle (Schneider talks about 0.3c, though he and Crawford later drop the number to 0.1c) and the prospects of its encountering dust grains that could produce lethal damage. We’ll eventually need precursor missions to the edge of the Solar System and beyond to understand how the interstellar medium differs from interplanetary space in terms of dust.

In the afterword to his novel Flying to Valhalla, Charles Pellegrino makes a vivid case for potential disaster:

“Flying through space at significant fractions of lightspeed is like looking down the barrel of a super particle collider. Even an isolated proton has a sting, and grains of sand begin to look like torpedoes.”

Much data gathering is ahead, but the process has already begun. For now, we have New Horizons on its way to Pluto/Charon and the Kuiper Belt, taking useful readings through the mission’s dust counter, which is, by a happy choice, named after Venetia Burney, the English girl who named Pluto (Michael Byers’ account of the Pluto naming discussion in his novel Percival’s Planet is wonderful). New Horizons is now just beyond the orbit of Uranus and, as I write this morning, is 2 hours and 32 minutes light time (just over 18 AU, or 2,738,437,000 kilometers) from the Earth. 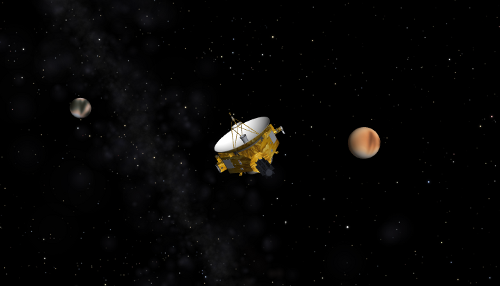 Dust detecting instruments that have measured dust beyond the orbit of Jupiter have been rare, beginning with those aboard the Pioneer 10 and Pioneer 11 spacecraft, which were followed up by the dust analyzer aboard Cassini (more about this, and Voyager 2’s contribution , in a moment). The New Horizons dust counter is fairly straightforward, a thin plastic film on a honeycombed aluminum structure about the size of a cake pan mounted on the outside of the spacecraft. Each dust particle that strikes the detector sets off a unique signal, allowing its mass to be inferred. The fact that this is a student-built project (though with NASA engineering standards and professionally built flight instruments) brings home the excitement of this deep space mission in a way that, let’s hope, will galvanize future scientists and engineers.

Voyager 2 was also useful in dust measurements, though in a more indirect way. While the Pioneers carried dust counters, Voyager 2 measured the effects of space-borne dust by its effect on the spacecraft’s plasma wave instrument. The latter was designed to measure charged particles inside the magnetic field of gas giant planets, but usefully enough, it also registered a hit when the spacecraft encountered dust, picking up the plasma the vaporized particle created. Cassini carried a Cosmic Dust Analyzer to measure interplanetary dust grains beginning with its gravity assist at Venus in 1999 and lasting until arrival at Saturn in 2004.

It will be fascinating to see how New Horizons’ dust data compare with earlier missions (thus far what is being seen is in agreement with data from the Galileo and Ulysses missions in Jupiter space). What we learn about dust in the Kuiper Belt will be entirely new information as New Horizons speeds through this vast region, giving us clues about what an interstellar precursor mission might one day encounter. Some scientists, Schneider among them, believe dust could be a showstopper for probes moving at 10 percent or more of the speed of light. If that proves to be the case, we’re in for serious rethinking of interstellar mission concepts.