“To a man with a hammer, everything looks like a nail,” said Mark Twain, one take on which is that the way we see problems shapes how we see solutions. That fact can be either confining or liberating depending on how open we are to examining our preconceptions, but in the case of Amy Mainzer (JPL), it leads to a natural way to describe a failed star. Mainzer, who is deputy project scientist on the Wide-field Infrared Survey Explorer mission (WISE), is an amateur jewelry-maker. For her, it’s easy to look at the image below and see gems. “The brown dwarfs,” says Mainzer, “jump out at you like big, fat, green emeralds.”

And that emerald below, dead center in the image, is hard to miss. 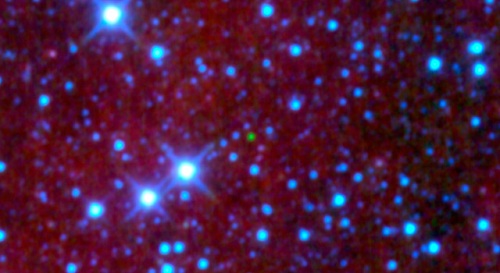 Image: The green dot in the middle of this image might look like an emerald amidst glittering diamonds, but it is actually a dim star belonging to a class called brown dwarfs. This particular object, named “WISEPC J045853.90+643451.9” after its location in the sky, is the first ultra-cool brown dwarf discovered by NASA’s Wide-field Infrared Survey Explorer, or WISE. WISE is scanning the skies in infrared light, picking up the signatures of all sort of cosmic gems, including brown dwarfs. Credit: NASA/JPL-Caltech/UCLA.

The brown dwarf in question is somewhere between 18 and 30 light years away in the constellation Camelopardalis (the giraffe), and is one of the coolest such objects known, with a temperature of roughly 600 Kelvin (326 degrees Celsius). This is one of those brown dwarfs that burn at temperatures close to a hot oven here on Earth, cool enough that it takes WISE’s infrared view from space to pick it up. In the image, we’re looking at three of the four WISE infrared channels, color-coded so that blue shows the shortest infrared wavelengths and red the longest. The methane in the brown dwarf atmosphere absorbs the blue-coded light and the faint object gives off little of the red, leaving green as the dominant color.

The best news about the new brown dwarf is that it turned up a mere 57 days into the survey mission, meaning that WISE is on track to find many more. Given how hard they are to spot, the possibility of an ultracool brown dwarf being in the Sun’s neighborhood, and perhaps closer than the Alpha Centauri stars, cannot be ruled out. In any case, mission planners think WISE will find hundreds of the objects within a few parsecs of the Sun. And who knows, we may yet find a perturbing body whose presence accounts for anomalous orbits like that of Sedna.

Remember this: Back in June, we learned that the Spitzer Space Telescope had found fourteen of the coldest brown dwarfs then known, so faint that visible light telescopes could not find them. The Spitzer study focused on a region in the constellation Boötes, whereas WISE will be looking at the entire sky. Peter Eisenhardt, a WISE project scientist at JPL, puts it this way:

“WISE is looking everywhere, so the coolest brown dwarfs are going to pop up all around us. We might even find a cool brown dwarf that is closer to us than Proxima Centauri, the closest known star. WISE is going to transform our view of the solar neighborhood. We’ll be studying these new neighbors in minute detail — they may contain the nearest planetary system to our own.”

We’ve only been able to confirm the existence of brown dwarfs for fifteen years, and we certainly aren’t through classifying them. T dwarfs are defined as being less than about 1500 Kelvin (1226 Celsius), but the colder class of Y dwarfs, found in stellar models but not yet confirmed, makes for prime hunting for WISE, which should be able to detect them. Are there more brown dwarfs within 25 light years of the Sun than normal stars? WISE should be able to tell us, and in doing so may tune up our target list for future deep space missions into the Oort Cloud and beyond.