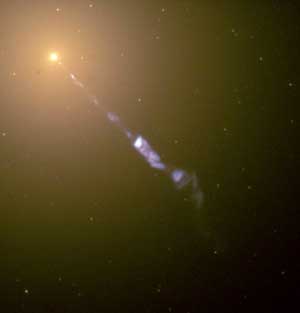 Did the Milky Way once have a jet powered by matter falling into the supermassive black hole at galactic center? There is little evidence for an active jet today, but we do see jets like these in so-called ‘active galaxies,’ those that show higher than normal luminosity over much of the electromagnetic spectrum. Some jets in active galaxies can be thousands of light years long, evidently emerging from each face of the accretion disk around a central black hole in the so-called active galactic nucleus (AGN). And on a smaller level, we’ve found similar jets emerging from the accretion disks around neutron stars and stellar-mass black holes.

Image: Streaming out from the center of the galaxy M87 like a cosmic searchlight is one of nature’s most amazing phenomena, a black-hole-powered jet of electrons and other sub-atomic particles traveling at nearly the speed of light. In this Hubble telescope image, the blue jet contrasts with the yellow glow from the combined light of billions of unseen stars and the yellow, point-like clusters of stars that make up this galaxy. Lying at the center of M87, the monstrous black hole has swallowed up matter equal to 2 billion times our Sun’s mass. M87 is 50 million light-years from Earth. Credit: NASA and The Hubble Heritage Team (STScI/AURA).

The Milky Way’s massive black hole seems quiescent today, but there remains the possibility that it produced a jet in the past, a notion piqued by the recent discovery of a previously unseen structure spanning some 50,000 light years. It took intensive processing of data from the Large Area Telescope (LAT), the highest-resolution gamma-ray detector ever launched, to make the find. The LAT is the main instrument of the Fermi Gamma-Ray Space Telescope, formerly known as GLAST (for Gamma-ray Large Area Space Telescope). Doug Finkbeiner (Harvard-Smithsonian Center for Astrophysics) lays out the find in stark terms:

“What we see are two gamma-ray-emitting bubbles that extend 25,000 light-years north and south of the galactic center. We don’t fully understand their nature or origin.”

Earlier data from the Wilkinson Microwave Anisotropy Probe and the Roentgen Satellite have suggested evidence for part of the structures, now called ‘Fermi bubbles,’ near the galactic center, but the Fermi LAT results go further in suggesting the extent and surprisingly well-defined nature of the bubbles. Perhaps these are survivors of ancient jet activity, but relating the structures to jets brings its own set of problems, as the paper on this work notes:

…the north-south symmetry of the bubbles has no obvious explanation in the context of an AGN jet: there is no reason for one jet to be oriented perpendicular to the Galactic plane. The large width and rounded shape of the bubbles are also not typical of jets, which are generally much more collimated, although a precessing jet might help explain the wide opening angle of the bubbles. If the central MBH becomes active on a relatively short timescale, the Fermi bubbles may be created by a number of past jets, which combine to give rise to the symmetric and uniform Fermi bubbles.

And if past jets are not the cause, one alternative is a burst of rapid star formation, which can likewise drive a huge outflow of gas. Whatever the case, the structures may be millions of years old and they span half the visible sky. Yet they have remained undetected because particles moving near the speed of light interact with interstellar gas in the Milky Way, creating a fog of gamma rays (the ‘diffuse emission’) that has until now obscured the bubbles. 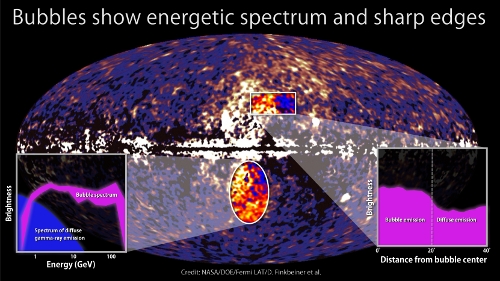 Image: The bubbles display a spectrum with higher peak energies than the diffuse gamma-ray glow seen throughout the sky. In addition, the bubbles display sharp edges in Fermi LAT data. Both of these qualities suggest that the structure arose in a sudden, impulsive event, such as an eruption from the Milky Way’s black hole or a rapid surge of star formation in the galactic center. Credit: NASA/DOE/Fermi LAT/D. Finkbeiner et al.

Centauri Dreams reader Antonio Tavani passed along links to the Italian coverage of the Fermi bubbles, and wondered whether this large, previously undetected structure might have implications for the Fermi paradox, the ‘where are they’ question that puzzles those who believe interstellar travel, even if limited to a fraction of light speed, is all but inevitable. It’s an interesting question. Are we seeing the remnant of high-energy jet activity that could have suppressed early life on worlds too near galactic center? At this point, all we can do is speculate, while noting that the emissions suggest the structure formed as the result of a large and rapid energy release.

Previous post: A FOCAL Mission into the Oort Cloud