I never have trouble finding topics to discuss on Centauri Dreams, but this morning’s take was unusually bountiful. For the past several days I’ve had two embargoed stories to choose from, both going public this PM. Do I write about tripling the number of stars in the universe, or do I choose the first analysis of a ‘super-Earth’ atmosphere? It’s a tough choice, but I’m going with the stars, given that the story relates to what I consider the most fascinating venue for astrobiology, planets around red dwarfs. We’ll do the super-Earth atmosphere — fascinating in its own right — tomorrow.

The story comes out of Yale University, whose Pieter van Dokkum led the research using telescopes at the Keck Observatory in Hawaii. We’ve long known that because of their faintness and small size, getting a handle on the red dwarf population was problematic. Usually, I’ve seen a figure around 75 percent cited for the Milky Way, meaning most stars in our galaxy are red dwarfs (the Sun, a G-class object, turns out to be representative of only about seven percent of main sequence stars, meaning we live around a star that is not typical). And because red dwarfs are so abundant, the consequences for astrobiology are obvious if we determine habitable planets can orbit them.

The Yale team has looked at red dwarfs not in our galaxy but in eight relatively nearby elliptical galaxies, located between 50 million and 300 million light years away. What they discovered is that there are about twenty times more red dwarfs in these elliptical galaxies than in the Milky Way. Says van Dokkum:

“No one knew how many of these stars there were. Different theoretical models predicted a wide range of possibilities, so this answers a longstanding question about just how abundant these stars are.”

Elliptical galaxies make up between ten and fifteen percent of the galaxies in the local universe, and the finding triples our best guess about the total number of stars in the universe, thereby increasing the number of planets we assume to be orbiting these stars. We’ve seen robust planetary systems around stars like Gliese 581 and can assume similar systems exist in the galaxies under observation. The red dwarfs recently discovered are typically more than ten billion years old, giving life plenty of time to gain a foothold. Indeed, van Dokkum talks about ‘possibly trillions of Earths orbiting these stars,’ a notion that gives still more punch to the Fermi paradox. 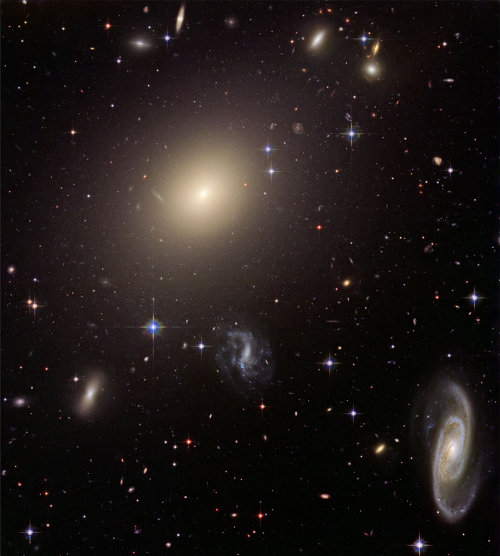 Image: Galaxies in the cluster Abell S0740, over 450 million light-years away in the direction of the constellation Centaurus. The giant elliptical ESO 325-G004 looms large at the cluster’s center, as massive as 100 billion of our suns. Hubble resolves thousands of globular star clusters orbiting ESO 325-G004. Globular clusters are compact groups of hundreds of thousands of stars that are gravitationally bound together. At the galaxy’s distance they appear as pinpoints of light contained within the diffuse halo. Other fuzzy elliptical galaxies dot the image. Some have evidence of a disk or ring structure that gives them a bow-tie shape. Several spiral galaxies are also present. The starlight in these galaxies is mainly contained in a disk and follows along spiral arms. Credit: NASA, ESA, and The Hubble Heritage Team (STScI/AURA).

If a multi-billion year old civilization existed in a typical galaxy, would it have made it all the way to Kardashev Type III status, able to put to use the entire energy resources of its galaxy? If so, wouldn’t we see some sign of its handiwork? Dick Carrigan has been studying such issues for years, looking for Dyson spheres by sifting through Infrared Astronomy Satellite (IRAS) data for objects that radiated in the infrared and carried the signature of a Dyson sphere, in which a star is surrounded by a swarm of energy-catching habitats or even completely enclosed within their shell.

No luck yet, but what Carrigan calls ‘interstellar archaeology’ gets more and more interesting when we consider a tripling of the number of potential life-giving stars in the universe (see Carrigan’s analysis of Kardashev Type II and III signatures and his Dyson sphere methodology here). What kinds of traces would a Type III civilization leave, and would we recognize it if we saw it? We do know that elliptical galaxies are made up of older, low-mass stars and show little star formation activity compared to more active spiral galaxies. Perhaps a lack of discernible Type III activity is telling us that technological civilizations have a relatively short lifetime.

Beyond these blue-sky musings, though, a tripling of the stars in our universe could have an impact on our understanding of how galaxies evolve, forcing us to take account of the mass of a much larger population of red dwarfs than we thought existed, and thus providing a new constraint on dark matter and its effects in relation to elliptical galaxies. That’s a helpful outcome, and it will be fascinating to see how the results of this paper are received and put to use.

The paper is van Dokkum and Conroy, “A substantial population of low-mass stars in luminous elliptical galaxies,” published online in Nature 1 December, 2010 (abstract)